While the soft tissues dominate the surface area of the neck, they are not the only elements that give it its shape. Several hard tissue components comprised of bone and cartilage also make a contribution. The form of the jawline is on the upper edge of the neck and is the superior suspension point for most of the neck’s soft tissues. The thyroid cartilage sits in the midline of the lower neck and is barely noticeable unless it sticks out too far. The prominence of the thyroid cartilage also has gender significance in helping to define a male vs a female’s neck.

While manipulation of the hard tissues of the neck does not change the all-important cervicomental angle, it does help influence how that angle is seen. The stronger and more defined the jawline is, the greater is the perception of more youthful neck due to a longer upper limb of the cervicomental. If the thyroid cartilage is too prominent, the lower limb of the angle is disrupted creating an undesireable bump in the neckline. While for men this bump may be fine and even attractive, it is not so for women. 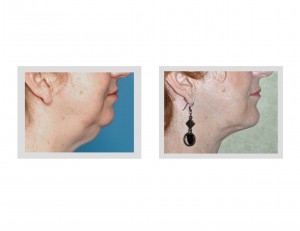 Chin Augmentation The jawline separates the neck from the face and is defined by both its length and it anterior projection. The chin is the most forward part of the jawline and its strength or weakness can help or hurt the appearance of the neck.  The horizontal projection of the chin can be easily increased using a variety of implant styles and sizes. Chin implants can be placed through either the mouth or from under the chin. For many patients, putting the implant in from under the chin assures proper positioning on the most forward part of the chin bone. Chin augmentation can be a very useful adjunctive procedure with any of the neck contouring procedures, particularly isolated liposuction and facelifts. 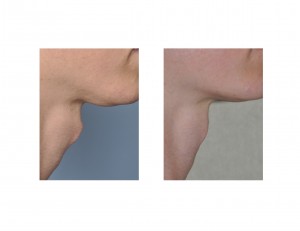 Tracheal Shave  The prominence of the thyroid cartilage often has little to do with one’s age. The size of the cartilages are genetically imprinted and not age-related. The one occasional exception is that seen after a facelift when the profile of the thyroid cartilage can become unmasked as the neck skin is tightened and pulled back. For those that have too strong of a neck bulge caused by the strength of the paired thyroid cartilages (more commonly known as an Adam’a apple), this can be reduced by shaving the prominence down. This is done through a small horizontal neck incision directly over the prominence. It is a virtually painless procedure with no recovery and a result that is immediate. Most patients obtain results where the size of the bulge is dramatically reduced and a few will get a completely smooth neckline in profile. 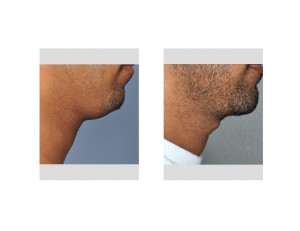 Tracheal Augmentation In rare cases, a more dominant or even an evident thyroid cartilage bulge is desired. This masculinizing neck procedure requires the placement of a specially-shaped implant on top of the thyroid cartilage to build out its projection where the paired cartilages meet in the midline. When combined with a submentoplasty above it, a more prominent tracheal bulge can be created.