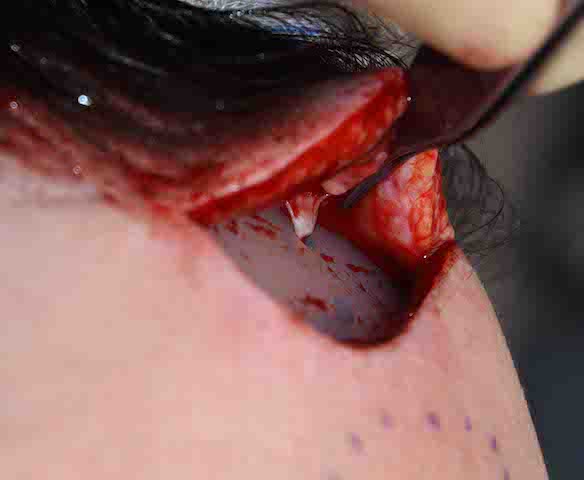 Custom implants made from the patient’s 3D CT scan are the most effective method of aesthetic skull augmentation. Whether it is the forehead, back of the head, temporal areas or top of the skull, covering large skull surface areas with a desired and smooth shaped implant requires a thoughtful preoperative design process. At the very least it allows the surgery to be done with the smallest scalp incision and makes the focus of the surgery about the optimal placement of the implant.

One concept that is biologically interesting about the placement of large surface area skull implants is that they create a separation between the scalp and the bone’s surface. The implant becomes surrounding by a scar capsule which is very vascular. There are no known adverse effects of this tissue separation due to the tremendous blood supply of the scalp. But if the implant had some tissue ingrowth through it there may be some biologic benefits to re-establishing a connection from the scalp down to the bone.

In custom skull implants a very common technique I use in this regard during their placement is the intraoperative creation of perfusion holes. This is done using a dermal punch of various diameters of 4, 5, or 6mms. As many as 50 perfusion holes can be placed into a skull implant. The purpose is to allow tissue ingrowth through the implant which could have multiple benefits of positional security and fixation of the scalp to the implant. Biologically it also reduces one large implant pocket into many smaller ones that are connected. 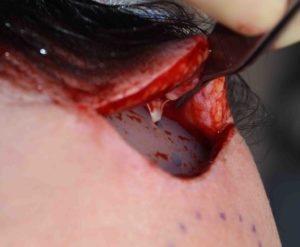 It is not common to see the long-term outcome of these holes placed into the implant unless a revisional procedure is done. Here is an example of the effect of a perfusion hole in a custom forehead implant which is undergoing a modification of some of its edges. The tissue band that has grown through one of the perfusion holes can be seen. The perfusion hole in front of it has already had the band released as the scalp is elevated.

The value of tissue ingrowth into skull implant perfusion holes is not precisely known. At the least it is harmless, at best it provides some re-establishment of scalp to bone tissue connections. Such tissue ingrowth only occurs in primary implant placement. It does not occur once an implant capsule has been established like in implant replacements. As an extension of the surrounding capsule its development would only be expected to occur from the initial injury of the implant pocket creation.