OR Snapshots – Skin Flap Closure over the Ear in Facelift Surgery 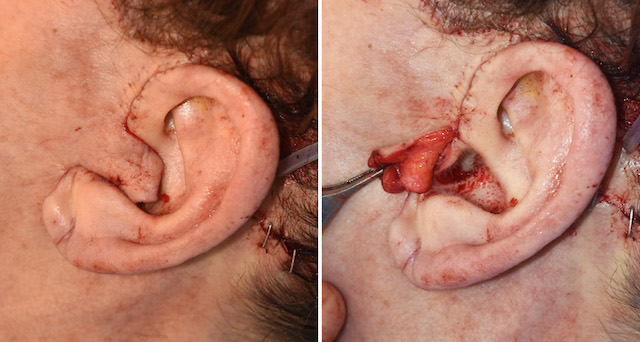 The facelift operation is one of the most recognizable anti-aging facial surgeries. Since its inception over one hundred years ago, when it got its original name of rhytidectomy or the excision of facial wrinkles, it has undergone many technique advancements and variations. Many of these have been done on what lies under the skin with the management of the deeper support tissues. Differing types of submusculoaponeurotic system (SMAS) flap dissections and manipulations has been a focus for decades.

One aspect of a facelift that has not really changed is that some overlying facial skin is removed. This is what the public generally perceives that a facelift is…skin that is pulled back and removed. That is understandable when one views the operation from the outside. And this remains as true today as it was in its early days of being performed, only the extent of the skin removed has changed. 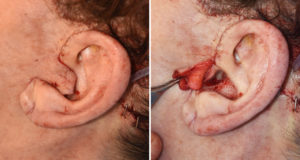 When you watch the skin flap from the outside being raised and then eventually bought back over the ear, it is interesting to see much of the ear disappear under it. At the least half of the ear becomes buried under the overlying skin flap. This speaks to the amount of loose face and neck skin that the patient has. Closure of the facelift then becomes a process of cutting skin away to expose the ear again. As seen in the attached picture the elevated skin has all been removed but the last portion over the tragus of the ear.

While the removal of skin is an essential part of a facelift, it is not done in isolation. The elevation and repositioning of the SMAS flap helps support the overlying skin repositioning and excision and also avoids too much tension placed on skin closure around the ear. This prevents postoperative scar widening and ear and hairline deformities.