OR Snapshots – The Submentoplasty Approach To Treating The Double Chin Problem

Neck contouring is a frequently requested procedure whether due to age-related sagging or congenital fullness. The desired contour of the neck as seen in profile is defined by the cervicomental angle. While people have a 90 degree cervicomental angle or can even ever achieve it, a neck angle in the 100 to120 degree range is desirable.

The midline of the neck, which is primarily responsible for the creation of the cervicomental angle, is composed of multiple tissue components. There are from outside in the enveloping overlying skin, subcutaneous fat, platysma muscle and subplatysmal fat. Each one of these neck tissue layers is modifiable and how they are manipulated/removed defines what the procedures are to do so.

By far the most common surgical neck contouring procedure is liposuction. It is an effective procedure whose only target is the subcutaneol,us fat layer. Because not all full or sagging necks have the same amount of fat thickness the effectiveness of neck liposuction can be variable. For many it provides a satisfactory improvement IF the main problem is the subcutaneous fat. For others the liposuction result may be less satisfactory due to the contribution of other tissue elements that have not been treated. 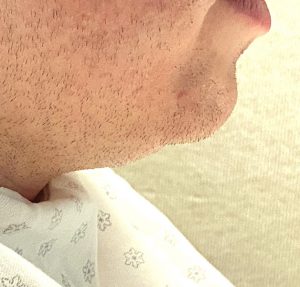 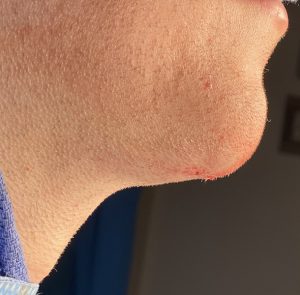 Graduating up from neck liposuction is the submentoplasty procedure. While not commonly recognized, although commonly performed as an essential part of facelift surgery, it takes the tissue levels treated from liposuction up two levels. In addition to initially using liposuction to reduce the subcutaneous fat layer, it also removes subplatysmal fat and tightens the platysma muscle in the midline. In some cases a small amount of submental skin may be removed from right under the chin as well. I is easy to see why a submentaoplasty is almost always more effective at improving the cervicomental angle than liposuction alone.

Neck contouring in young people is often about getting rid of the double chin appearance. This means there is a submental bulge below the soft tissue chin pad. There is probably too much isolated liposuction done for this problem when a submentoplasty is going to be more effective. While most young patients do not have a platysmal muscle separation in the midline they can still have platysma muscle tightening. To access the subplatysmal fat a center strip of muscle needs to be removed. One the deep fat is treated the playsmal muscle is brought back together which creates a hammock-like tightening/elevation effect on the cervicomental angle.

The submentplasty is a great complement to any chin or jawline augmentation procedure because of its diametric action. Even when performed alone a near 90 degree cervcomental angle or completely flat submental contour may never be able to be achieved. But it always offers a level of improvement over what liposuction alone can accomplish.