The area around the eyes is known in plastic surgery as the periorbita or the periorbital region. It consists of the eyelids and cheek soft tissue which is supported underneath by the bones of the orbital rims and the zygoma. How this area appears externally, in both youth and as one ages, is highly influenced by the underlying bone structure that supports it.

In youth, the cheeks appear full and prominent and the lower eyelids are fairly smooth and tight.  The outer corner of the eye (where the upper and lower eyelids meet) is sharp. As one ages, the cheek soft tissue drops down, rounding out the corner of the outer eye, and the eyelids develop loose tissue and wrinkles. Often a groove develops at the junction of the lower eyelid and cheek across the lower rim of the eye. While most of this is caused by loose and sagging soft tissue, there is some contribution from the underlying bone as it slowly resorbs in some patients.

For some patients, the appearance and the aging of the periorbital region is worsened by their natural bony anatomy. Their cheek bones are flatter and the lower orbital rim is more recessed, creating what is known as a flatter face or lack of any facial convexity. (as viewed in profile) This is particularly evident in what is known as the orbital rim-eyeball relationship or vector. The position of the cheekbone in relation to the cornea of the eye is determined in a side view by dropping a perfectly straight  vertical line down from the cornea. If the cheek prominence extends beyond this corneal line, it is known as a positive vector. If it lies behind it, it is a negative vector. It is patients with a negative vector that are predisposed to looking older in the periorbital region earlier than those with a positive vector.

Using synthetic materials to treat the negative-vector patient is one of the newer and less common uses of facial implants. Orbital rim implants can be used to build-out this skeletally weak facial area. By changing the horizontal relationship of the orbital rim to the cornea, more midfacial convexity can be obtained. This provides greater support to the lower eyelid which can be a real asset when performing lower eyelid tucks (blepharoplasty) or correcting undesired lower eyelid sagging after such a procedure. It is also a great way  to rejuvenate a hollowed or sunken in look around the lower eyes.

Orbital rim implants are placed through a lower eyelid incision. It is  not possible to place a rim implant through an incision inside the mouth. Besides having to work around the large infraorbital nerve, one can not get on top of the rim where the implant needs to be. Certain manufacturers do make a series of orbital rim implants, one of which is just for the lower orbital rim. It is larger than what most patients need but it can be easily shaped to fit any patient’s rim anatomy.  They are always secured with titanium 1.5mm screws.

There are other implant type options for those patients with more minor bone deficiencies or who do not prefer the use of an implant material. Smaller amounts of orbital rim augmentation can be done by carving out Gore-ex blocks or sheets or using the larger tubes of Advanta implants which can be easily cut and adapted to the rim. Small 1mm titanium screws are used to secure them. A more natural alternative is to harvest and place dermal-fat grafts in strips. They are not as reliable in terms of volume or shape but I have found that much of what is implanted is retained.

Rejuvenation of the periorbital region may also require some additional procedures including lifting of the midfacial soft tissues and tightening of the corner of the eye. These are almost always used in the older patient. Younger patients require bone augmentation only. 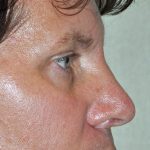 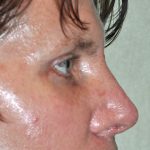 These procedures do cause some significant swelling around the eyes for several weeks. It usually takes about three to four weeks until one looks fairly normal and the benefits can be fully realized.