Otoplasty For Protruding Ears: Matching The Cartilage Problem With The Surgical Technique

Even though the ears are located off to the side of the face, they can have an influence on one’s facial appearance. Being made up of a collection of ridges and grooves with a dangling earlobe hanging off of a cartilage framework, the ear is often not appreciated for its complex shape…until it is abnormal. The most common ear shape anomaly is when it sticks out too far.

The ear should not be a dominant structure on one’s head. With a geometry that is as individual as one’s fingerprint, it remains obscure as long as it sits at an angle of less than 30 degrees from the side of the head. Once going beyond this angle, the ear becomes too prominent.This prominence is caused by an alteration in the shape of the ear cartilage. The two most common causes of the protruding ear are absence of the antihelical fold and a large concha. 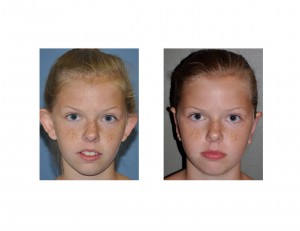 The two primary folds of the ear are the helix and the antihelix. The second inward fold of the ear is the antihelix. Situated inside of the outer rim (helix) of the ear, this fold brings back the entire outer edge of the ear. When it is absent, the ear protrudes much like the inside of a cup. Complete absence of the antihelical fold accounts for the most dramatic of protruding ears…ears that stick out dramatically. This is the classic type of otoplasty correction in which horizontal mattress (Mustarde) sutures are placed from the back of the ear to create this ear fold. The result is easy to see before by folding back the outer helix and manually creating this ear fold. 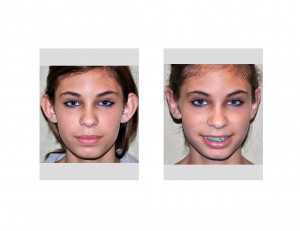 The most inner component of the ear is the concha. It has a bowl shape that surrounds the ear hole or external auditory meatus. The size of this bowl can also be a source of ear protrusion. If it is very large, it pushes out the the antihelical and helical ear folds away from the size of the head. A large concha usually causes a less dramatic protrusion than an absent antihelical fold. A large concha makes the ear stiff when pushed against as it is a thicker cartilage and has more surface area than the outer ear folds. Correction of the conchal hypertrophy protruding ear involves pulling back the concha through sutures between it and the mastoid fascia. Often the stiffer concha needs to be weakened by thinning it or removing some cartilage.

In reshaping of the protruding ear, it is important to match the corrective technique with the cartilage shape problem. Failure to do so results in many of the postoperative otoplasty problems which consist of unnatural shapes and bends of the ear’s cartilages. Once the ear cartilages are resected, unnatural bends created, or set back too far, secondary correction can be difficult.