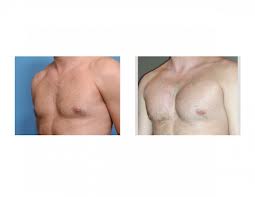 One major difference is the such implants in men are for muscular augmentation. As such it is placed below the pectoralis major muscle. But unlike breast implants which are also placed below the pectoralis muscle, pectoral implant placement should not violate the lateral pectoral muscle border. (total muscular coverage)  Breast implants go beyond this muscle border to create a breast mound effect and are known as partial submuscular or dual plane implants.

If during the placement of a pectoral implant the lateral muscle border is violated or weakened, the implant will set lower than the muscle outline. Instead of creating an enhanced chest muscle effect the augmentation result can start to resemble more of a breast mound effect. This is known as bottoming out of the implant’s position. This can occur in pectoral implants just like it can occur in breast implants.

Treating the malpositioned or bottom out pectoral implant requires a procedure known as capsular plication or a reduction capsulotomy. In this procedure the bottom and/or side pocket of the implant is tightened up or lifted and closed with permanent sutures. In essence the lateral and lower border the pectoralis muscle is re-established. This is conformed before surgery by manually lifting the bottom of the implant up into the desired position. 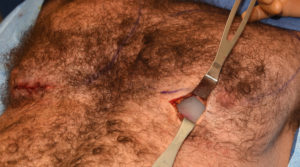 Repositioning of the bottom out pectoral implant(s) can not be done through the same high axillary incisions by which they were placed. It requires a lower inframammary incisional approach to get the implants back up and secured into a better position…just like is done with repositioning breast implants in women. 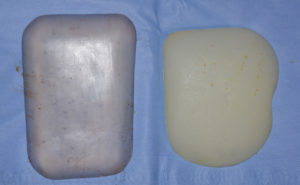 In some cases of pectoral implant repositioning, the opportunity for a change in implant implant style and size can also be done. The inframammary approach, with an incision no longer than 5 to 7cms, provides good access for implant removal and replacement.