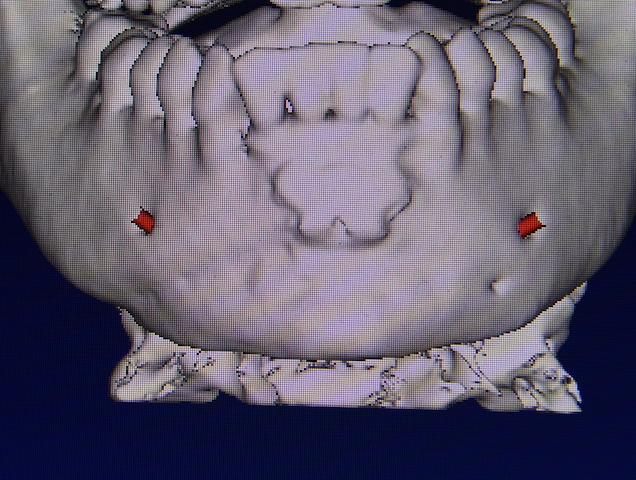 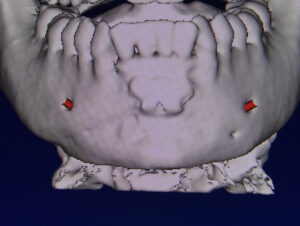 There are numerous technical considerations in performing a sliding genioplasty. But one of the most important is to avoid injury to the inferior alveolar nerve as this nerve supplies feeling to the lower lip and anterior teeth. Since the lateral bone cuts of the genioplasty extend past the mental foramen (exit of the nerve from the bone) the proximity of the bone cut and the path of the nerve is of paramount importance.

It has long been acknowledged that the inferior alveolar nerve loops inferiorly and emerges superiorly to exit the bony foramen. As a result it is known that the lateral osteotomy cut of the sliding genioplasty should extend at least 5mms below the mental foramen and the visible nerve exit to prevent inadvertent nerve injury from the osteotomy line. A new paper on this topic is interesting is whether it presents any new insights into the bony genioplasty technique,

In the October 2020 issue of the journal Plastic and Reconstructive Surgery an article on this topic was published entitled ‘Avoiding Inferior Alveolar Nerve Injury during Osseous Genioplasty: A Guide for the Safe Zone by Three-Dimensional Virtual Imaging.’ In this paper the authors analyzed over 300 patients from various occlusal angle types using CT derived 3D models of the vertical distance between the inferior margin of the mental foramen and the west point of the inferior alveolar nerve canal. Statistical analysis was used to determine the safe distance for the osteotomy cut of the boy genioplasty.

Their results showed that Class III and cleft lip and palate patients have greater vertical distances between the foramen and the inferior location of the nerve canal than Class I and II occlusal relationships. ( 4.4mms vs 3.4/3.6mms) But variations exist in which lower nerve canal positions exist. Based on this analysis they suggest that the safest placement of the osteotomy line should be 9mms below the mental foramen. For some patients with low mental foramen levels this may necessitate a change in the osteotomy pattern from a horizontal pattern into a V- or U-shaped pattern. 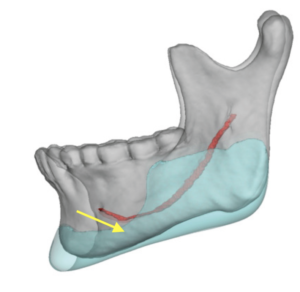 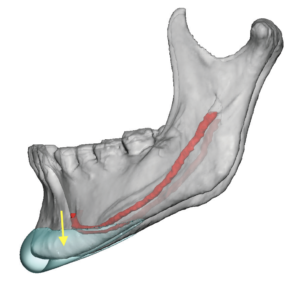 New anatomic information on the inferior alveolar nerve pattern as it exists the mental foramen adds to the safety of the sliding genioplasty procedure. I have looked at thousands of 3D CT images of the lower jaw in custom chin and jawline implants designs where it is common practice for the imaging company to show the intraosseous course of the nerve. (even though it has minimal relevance to the implant design) It can be appreciated that int some patients the nerve loops very inferior to the mental foramen before it exists (vertical nerve exit) while in others the nerve is more angulated more backwards before it exists the foramen. (higher canal position) All of these patients have Class I or orthodontically corrected occlusions. 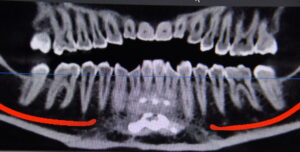 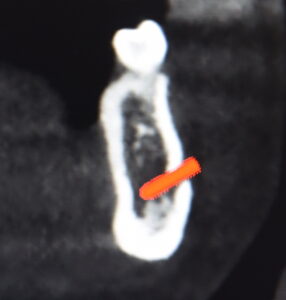 I have also observed that the cross-sectional analysis of the nerve can also show a medial to lateral exiting pattern of the nerve. This means that the nerve canal may be low but it is located more medially and further away from the potential osteotomy line cut. This 3D piece of information provides additional insight that a flat 2D assessment of measuring the vertical distance between the inferior position of the foramen and the nerve canal does not evaluate.

While it is clear that the lower the osteotomy line the greater is the margin of safety for the nerve, great variability exists in how the nerve exits the bone. Rather than using a standard ‘safe distance’ for the level of the osteotomy cut for everyone, each patient should be preoperatively evaluated by a cone beam or CBCT scan of the mandible to determine where their inferior alveolar nerve is in the bone and how it exists the mental foramen. Such scans today are very low cost and should be considered for every patient undergoing a bony  genioplasty of any dimensional change.