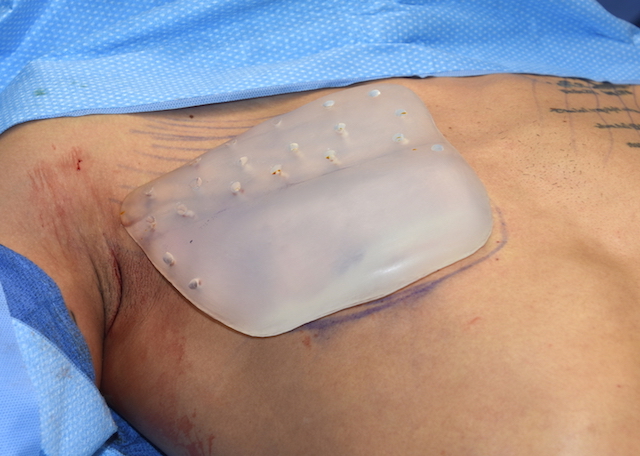 Background: Poland syndrome is a well known congenital chest deformity typically affecting only one side of the body. It is most commonly characterized by underdevelopment of the pectorals muscle with a higher and often smaller nipple-areolar complex. They are many other potential anatomic abnormalities such as anomalies of the rib cage and the ipsilateral upper extremity but the deficient pectoralis muscle is the dominant physical feature in most affected patients. It is called Poland syndrome not because it was first recognized in that country but by its original description in 1841 by Dr. Alfred Poland. While its cause is not known it is known to occur more frequently in males than females and is fairly rare. (occurring in 1:20,000 or with roughly 4 million births each year in the U.S. …which is 200 new cases of Poland syndrome per year)

What brings the male Poland syndrome patient in for treatment is the difference in the shape of their chest due to the pectoral muscle asymmetry. The affected pectoral muscle is smaller which means it sits higher on the chest wall and its muscle fibers have a more horizontal orientation between the sternal origin and the humeral attachments. As a result of the absence of muscle in the lower half of the chest wall the nipple is pulled up higher than the other side, magnifying the chest wall asymmetry.

Recreating the absent pectoral muscle would logically see to be best done by a muscle transfer/transplant. And while the latissimus dorsi muscle can be transferred from the back to the chest as a pedicle flap, its muscle volume is significantly lost and the scars to do the procedure create their own aesthetic drawbacks. This leaves the option of an implant to replace the missing muscle which provide assured volume retention and hidden scarring to place…albeit with the associated risks of an implant.

Case Study:  This young man was affected by a right Poland syndrome involvement principally of the pectoral muscle and nipple. His chest wall defect was ‘magnified’ by his overall muscular development of all his upper body. To create a matching pectoral implant from the other side, a silicone elastomer moulage technique was done which was then transferred to a computer design for further design and fabrication.

Under general anesthesia and in the supine position with the right arm extended,  a high transaxillary incision was made and a dual plane tissue pocket was created through an upper subpectoral muscle and lower subcutaneous dissections. The implant was prepared for implantation by the placement of multiple 6mm perfusion holes in the upper flange of the implant that was to be under the existing pectoral muscle. This will help stabilize the implant with tissue ingrowth. The implant was then rolled, passed through the much smaller axillary incision and unfolded and positioned. A drain tube was also placed. His intraop pictures showed miss improved chest wall muscular symmetry.

When the drain tube was removed after four days, his early result looked very encouraging with much improved pectoral muscle symmetry.

While custom pectoral implants provide the most accurate and sustained symmetry between the two sides of the chest, it is important to remember it is an implant and has all the risks associated with it. Trying to establish some tissue ingrowth through it, particularly in an active young male, has merit in trying to lessen some of these risks. (seroma and implant migration/movement)

2) A moulage technique to create a computer design is one method for creating a custom pectoral implant for muscle volume restoration.

3) A custom pectoral implant can be placed through a high axillary incision for a near scarless placement method.