Background: Aesthetic augmentation of temporal hollowing, like most forms of facial augmentation, is most commonly done using injectable fillers and fat. This is certainly appropriate given that temporal hollowing is a soft tissue deformity and not as a result of a bone defect or deficiency. While different forms of such injectates exists and their advantages are an immediate effect and are non- to minimally surgical in nature, they also have distinct disadvantages. Most have no assured permanent volume retention and there are always potential issues with irregularities and asymmetries.

Before injectable temporal augmentation techniques came into popularity, they were done far less frequently and using bone-based methods. The implanted materials were most commonly bone cements or some form of reconstructive implant. While treating a soft tissue temporal hollowing using bone augmentation to push out soft tissues has theoretical merit, the natural angulation of the temporal fossa bone creates potential issues with it. The deepest part of temporal hollowing is where the deepest concavity of the bone is….which is difficult to fully and smoothly fill. It also requires a temporal hairline incision for access which poses its own potential aesthetic tradeoff.

Unless it is done through fully open coronal scalp incision as part of a reconstruction, it is very hard to fill the temporal fossa in an even manner. When done for cosmetic purposes, a cranofacial approach with bone cement has been historically used through a temporal hairline incision. But like all bone cements placed through smaller incisions the risk of irregularities and asymmetries can occur. While one may think that buried under the thick temporalis muscle such irrregularities would be obscured…this is not the case. 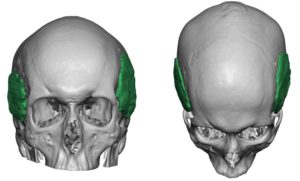 Case Study:  This male had a prior history of temporal augmentation to treat an aesthetically narrow head shape. Through a temporal hairline incision, PMMA bone cement was placed into the temporal fossa. This provided uneven augmentation and asymmetry of implant location and volume as seen both externally as well as by 3D CT scan. 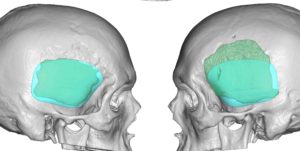 Using the 3D CT scan new custom temporal implants were made that had a lower and smoother implant profiles and more symmetrical placement. The differences between the new silicone

temporal implants and the indwelling PMMA bone cement can be appreciated in their overlay design images.

Under general anesthesia the existing temporal hairline scars were used for access. Through which the indwelling bone cement was removed and replaced with the new custom silicone temporal implants. 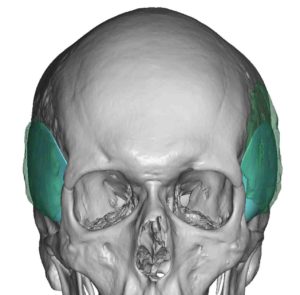 This case illustrates, like many custom implant designs used for replacements of previous standard implants that have aesthetic shape and contour issues, the superiority of 3D imaging and designing. Even though the previous implant surgery may not have created the desired result for the patient, it does provide a roadmap as to how to more precisely make an improved implant design that can achieve the patient’s objectives.

2) The traditional approach of temporal augmentation is done on the bone with various forms of bone cements which are prone to irregularities and asymmetries.