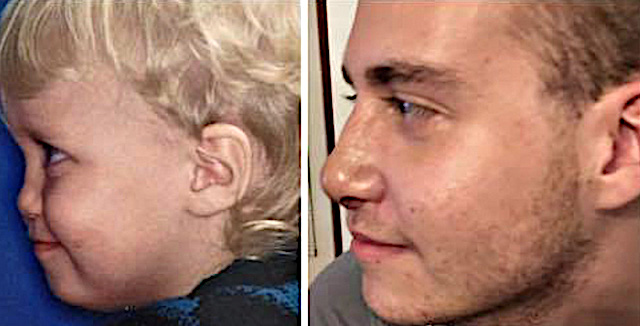 Background: One of the rare types of developmental craniofacial deformities is that of Binder’s syndrome. Originally given the name of ‘Maxillonasal Dyostosis’ by von Binder over fifty years ago (now known as Naspmaxollary Hypoplasia) , the classic findings are a central facial hypoplasia that affects the front sinuses superiorly down to the anterior nasal spine. It it believed to occur from a growth center disturbance in the prosencephalic end of the neural tube which affects midfacial development by limited development of the nasal septum. This results in the classic appearance of a retruded midface and a flat nose.

The obvious treatment for Binder’s syndrome is nasal and midface augmentation in all cases, some of which may need maxillary advancement as teenagers. Rhinoplasty surgery typically employs L-shaped rib cartilage grafts and midface augmentation can include bone/cartilage grafts or implants. There is no consensus as to the timing of these surgeries. (minus the LeFort I procedure if needed)

My experience in five patients in the past 25 years has been to serially expand the nose with early rib cartilage grafting through an L-shaped construct. While early rhinoplasty surgery does not obviate the need for further surgery in late adolescence or adulthood, it does help to expand the nasal skin and avoid a tight columella and nasal tip skin later if surgery was delayed until much of facial growth is complete. This is relevant given that the flat nose in Binder’s syndrome has long been considered to be a problem of soft tissue deficiency in the columella as much as that of a structural deficiency. This progressive soft tissue expansion can avoid extensive efforts later at trying to overcome the constriction of the soft tissue covering of the nose and of the lining of the nasal cavities.

Another benefit of early intervention in Binder’s syndrome patients is psychological. Efforts to improve the patient’s self-image during their growth period is also of great relevance, more today than every before given the prevalence and importance of social media. 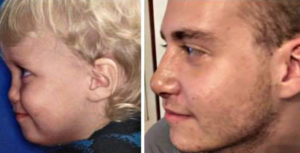 Case Study:  This is a male born with Binder’s syndrome that received his final surgery at age 22. Since birth he had a total five (5) surgeries including two rib grafts, four total nasal surgeries and cheek and premaxillary augmentation with solid silicone implants. His final surgery was a final nasal reshaping consisting of an ePTFE implant to smooth out the dorsal line. He did not require a maxillary advancement and developed a Class occlusion with orthodontics alone.

1) Binder’s syndrome or naso-maxillary hypoplasia presents as a retruded midface and flat nose seen right after birth which will fail to develop ‘catch up’ facial growth.

2) The primary surgery needed is an L-shaped dorsocolumelalar construct done early to create needed soft tissue expansion. More than one rhinoplasty effort over the facial growth cycle will be needed.

3) Like most craniofacial developmental disorders the influence of growth dictates that the final mid facial surgery in Binder’s syndrome is never assured until full facial growth is complete.