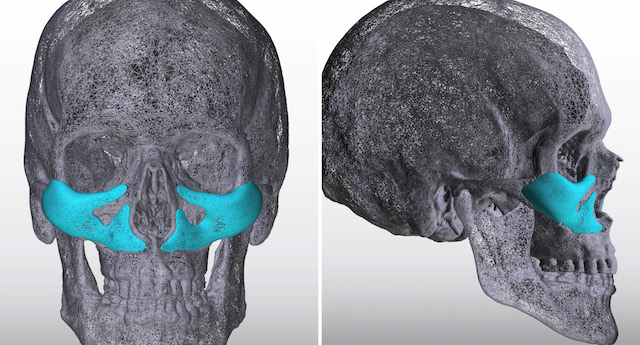 Background: The forward projection of the midface is a function of facial skeletal development, genetics and one’s ethnicity. Functionally what matters is how the teeth come together and whether there is enough dental overjet for adequate mastication. But short of the alveolus the rest of the midface skeletal development primary affects facial appearance short of severe midfacial hypoplasia where the nasal airway may become compromised.

Lack of adequate midfacial growth creates varying degrees of a panfacial appearance. While in more severe forms a ‘dishface’ appearance may be seen with a Class III malocclusion, most people so affected have more subtle manifestations of it. Negative orbital vectors, undereye hollows and premaxillary-paranasal deficiencies are common aesthetic presentations, all of which are reflective of a partial or more total midface skeletal deficiency. But other forms of midface deficiencies exist that are not bone-based but rather that of the soft tissue only. Various forms of facial lipoatrophy exist which can make the midge appear deficient even though the skeletal foundation has adequate forward projection.

Historically midface deficiencies were treated by different levels of LeFort osteotomies. But this is really only useful when a malocclusion exists whose correction limits the degree of bony change above it. Today soft tissue augmentation is available, whether it is injectable synthetic fillers to fat injections, that can provide soft tissue augmentation which can help camouflage skeletal deficiencies. But their use is plagued by either temporary effects, unpredictable volume retention and/or lack of creating the desired contour changes.

Case Study: This middle-aged male had an aesthetic midface deficiency as evidenced by undereye hollows, pseudo infraorbital fat herniation, a negative orbital vector and a flatter midface profile. He had an orthodontically corrected Class I occlusion. He had a prior history of total mid facial fat injections, all which had completely resorbed by three months after the surgery. 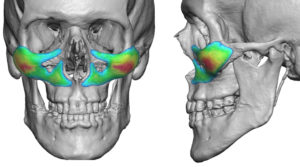 Using the 3D CT scan custom midface implants were designed that augmented the infraorbital rims, anterior zygoma and down across the midface to the paranasal region.

Under general anesthesia these implants were placed through a combination of bilateral intraoral vestibular and lateral lower eyelid incisions. Small screws fixation was used at each incisional location. 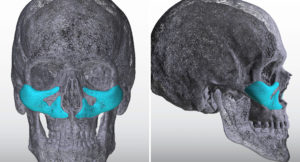 The contemporary design of custom midfacial implants allows for skeletal augmentation that historically has never been possible. While in the past the use of standard cheek, tear trough and paranasal implants was mixed together to create a collective midface augmentation effect, their lack of connectivity and surface area coverage limited their effectiveness.

1) Midfacial flattening extends from the imfraorbital rams down to the base of the nose and maxilla.

2) Custom implant augmentation can create horizontal projection of the midface short of the alveolar/teeth level.

3) Custom midface implant placement is done through a combination of intraoral and limited lower hemi-lid incisions.