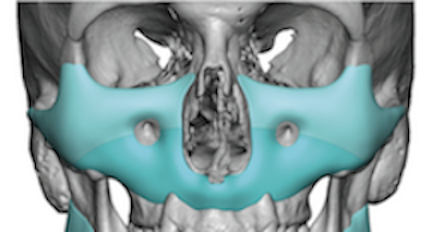 Background:  The face can be augmented by standard preformed implants in a variety of well known ‘spot’ or smaller locations. Cheek implants are often cited as midface implants but there position is largely more lateral than central.The only central midface standard implants are for the infraorbital and premaxillary-paranasal areas, which have roles for isolated limited augmentations.

But when it comes to more complete midface augmetnations for creating anterior midface augmentations (pulling the midface forward) most patients and doctors do not think of implant augmentation…they think of a LeFort I advancement osteotomy. And while this may be appropriate for patients with a Class III or edge-to-edge malocclusion, such osteotomies do not have a role in patients with reasonable centric occlusal relationships.

The most effective complete midface augmentation method when a normal occlusion exists is implant coverage. This can only be done by a custom implant approach where the entire midface skeletal area (infrarorbital-anterior malar-maxillary) region can be augmented with the shape and dimensions desired. This is what I call the Custom Midface Mask implant, while the design offers extraordinary coverage and results, also creates some unique challenges for surgical implantation. Illustrating the principle that while anything can be designed on the computer that does not mean it can always be placed as it is designed.

Case Study: This young male desired to improve his midface projection from the maxillary alveolus to the infraorbital rims. He was particularly interested in infraorbital rim elevation to improve his infraorbital hollows, augmentation of the premaxillary-paranasal region for central lower midface enhancement and malar extension for some zygomatic arch definition. 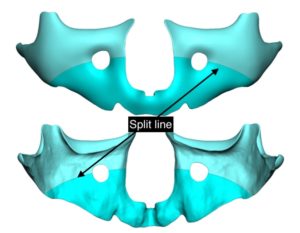 Because of his lower eyelid rounding and scleral show, which would be helped but not optimally improved by raising the vertical height of the infraorbital rim, canthopexies with spacer grafts were also planned. This created the need along with the infraorbital part of the implant to have access through lower eyelid incisions. Thus a three-piece implant design was done having the implant manufactured in three pieces which is how it would be placed.

Under general anesthesia the lower maxillary portion of the implant was placed through intraoral incisions. Multiple 5mm perfusion holes were placed throughout the implant as well as pedicle buccal fat flaps used to cover it underneath the two layer musculomucosal incisional closure.

The Custom Midface Mask implant could be placed from a completely intraoral approach IF there was no need to saddle and raise the infraorbital rim height. This could be done by making a superior slit in the infraorbital hole in the implant. But when significant infraorbital rim height is needed and lower eyelid reshaping is to be done as well it makes sense to design a two piece midface implant design to be placed from a dual superior-inferior incisional approaches.

1) Complete augmentation of the midface can be done with a Custom Misface Mask Implant.

2) Complete coverage of the anterior midface (infraorbital-malar-maxillary ) bony area requires a three-piece implant design for split placement through lower eyelid and intraoral vestibular incisions IF lower eyelid reshaping is to be done as well.