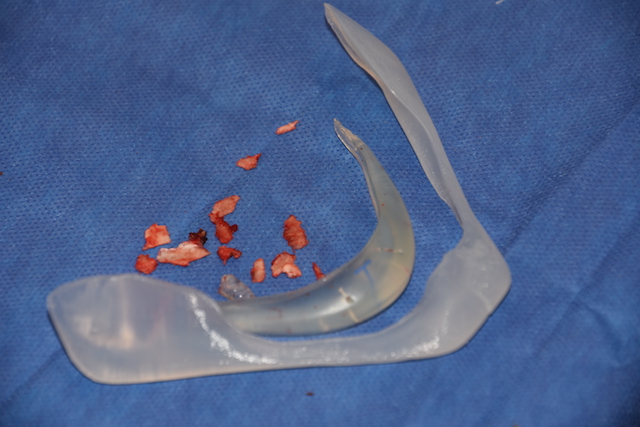 Background: The chin implant is a common performed procedure for the weak chin. For some patients this is a ‘one and done’ procedure in which a satisfactory result is obtained and the implant remains a permanent device. But for others the initial results may be underwhelming and the patient seeks further surgery for an enhanced result, sometimes shortly after the chin implant placement but often years to decades later.

Having removed many chin implants I have seen a large number of implantation sites and observed the tissue reactions around them. In some cases there is the classic bone imprinting that has occurred. In other cases bony overgrowth around portions of the implant has occurred with variable amounts of extension across the implant’s surface. Frequently various amounts of imprinting and bony overgrowth are present. Both can be preoperatively seen in custom jawline implant designing on the 3D CT scan. 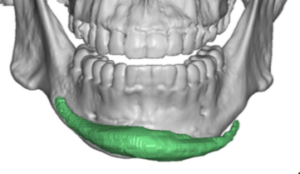 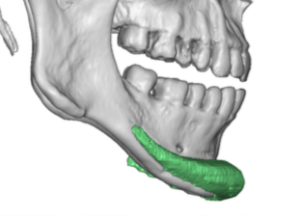 Case Study: This male had a prior chin implant placed, which was an improvement, but was still aesthetically lacking. After having it in place for a few years he decided he preferred a more complete jawline augmentation. A 3D CT scan show the implant position with some modest asymmetry with the elongated right wing of the implant higher and the left side lower. 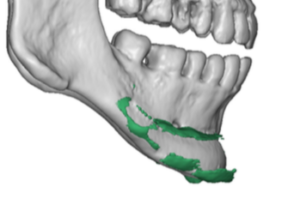 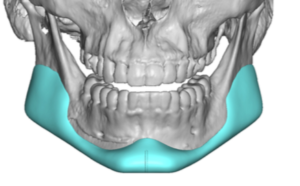 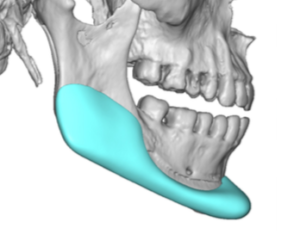 The chin portion of the jawline implant design was based on wanting a little more horizontal projection and a slightly more square chin shape. At the jaw angle region some vertical lengthening was needed to create coverage of the antegonial notch region along the inferior border. 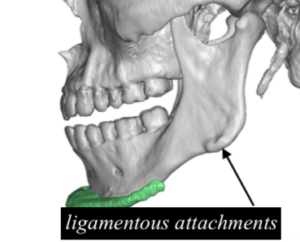 When considering vertical lengthening of the jaw angles in a custom design the strength of the ligamentous attachments needs to be considered. When a strong raised ridge or prominent bumps are seen along the edge of the inferior border of the angles, this is an indicator that strong ligamentous attachments of the masseter muscle exist. This requires both careful elevation of them off of the bone during  surgery as well as a jaw angle implant design that maintains the natural bony shape of the angle. (in other words don’t try and square off the jaw angle shape which will result in inadequate muscle coverage of the implant postop) 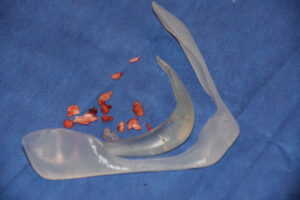 During surgery the chin implant was removed and it did require a far amount of bone removal to reduce the bony overgrowths. The 3D CT scan probably underestimated the extent of the bone overgrowth. (it can’t ‘see’ the very thinnest layers of the overgrowth)

1)  In replacing chin implants with a custom jawline implant, bony overgrowths may need to be removed around the chin area for the fit of the new implant.

2) An indwelling chin implant helps guide the design of the custom jawline implant.

3) In lengthening the jaw angle region of a jawline implant it is important to keep the natural curved shape to prevent lack of adequate muscle coverage later.