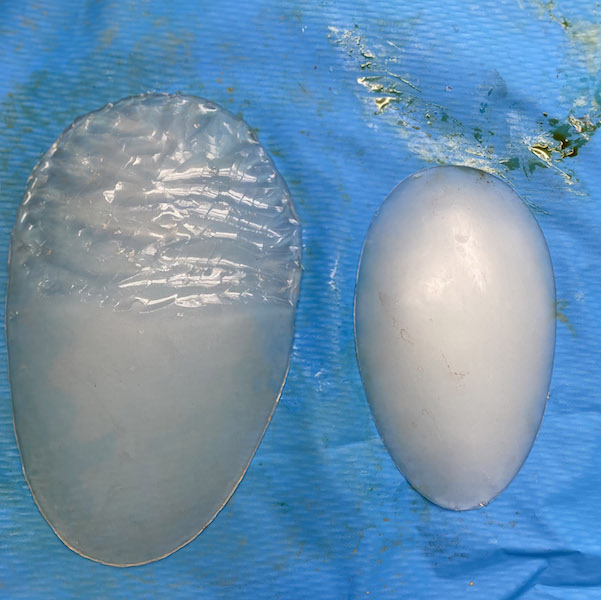 Background: Aesthetic augmentation of the hips is far more challenging that other body areas for two reasons. First the common use of injection fat grafting, unlike that of the buttocks, has far less predictable results. Fat survives more poorly in the hips than the buttocks for unknown reasons. Second, there are no standard hip implants that are commercially available. There has been historically limited patient demand and this has resulted in a lack of extensive surgical experience in hip implant augmentation efforts.

Because of the dramatic surge in buttock augmentation request, primarily due to BBL surgery, it is a natural extension of those efforts to involve the adjoining hip areas. Without standard hip implants being available, surgeons will reach to use whatever implants may be available that seems suitable. In doing hip implant replacement surgeries I have seen many different types of implants placed into the hips including breast implants, buttock implants, and calf implants to name the most common.

Inevitably if the desired aesthetic hip augmentation effect is not achieved, secondary hip implant surgery will be sought. The one good thing about having any form of hip implant in place, its aesthetic effects allows the patient to know better about what additional effect is needed. If the exact indwelling implant shape and size are known this makes it easier to design a new custom hip implant that can be ore successful. Unfortunately, more times than not, the exact indwelling implants are not known. In this case the custom hip implant mat be designed based on external measurements with the surgeon being prepared to intraoperatively modify the implant as needed. 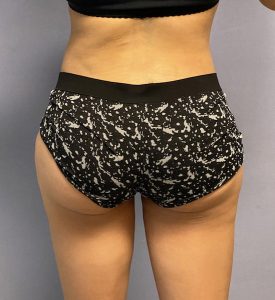 Case Study: This female had a prior history of hip implants which were aesthetically deficient in not extending up high enough towards the iliac crest. She did want any increased thickness just length of the implant. The size and shape of the indwelling hip implants was unknown. 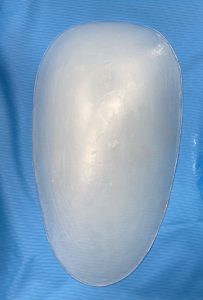 Based on external measurements of the desired zone of hip augmentation, custom hip implants were designed based on the palpation of the lower edge of the existing implants and the vertical length needed to reach just under the the bony iliac crest. The goal being to fill in the hip dip that remained above the existing implants. 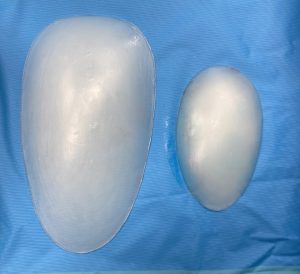 Under general anesthesia and in alternating lateral decubitus positions, the existing incisions were reopened and the indwelling implants removed. They were relatively small implants for the hips that may have been originally designed for the calfs of the lower leg. Comparing the removed implants with the new custom hip implants showed the size differences. 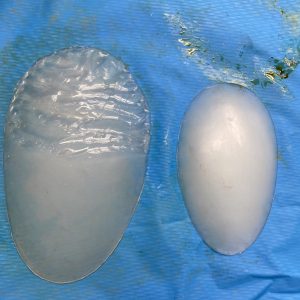 In evaluating the existing pocket and after extending the superior aspect of the pocket superiorly and widening the pocket as well, the custom implant designs were too big. Hand modification of them was done to reduce their vertical length as well as some of the upper pole thickness. Comparison with the removed hip implants still showed a significant size difference. 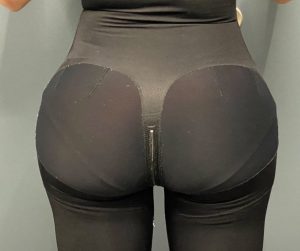 The new hip implants were inserted and closed over a drain. The drain was removed 72 hours later at which time the difference in the aesthetic hip augmentation effect could be appreciated.

Secondary hip implants replacements can be successful. But even with custom hip implant designs there may always be the intraoperative need for implant modification along with pocket adjustment. (expansion capsulotomies)

1) There are no standard off the shelf hip implants so a wide variety of other body implant styles and sizes are encountered in hip implant replacements.

3) Because most indwelling hip implant shape and size is often unknown, any custom hip implant design has the potential to need intraoperative modification to fit into the expanded pocket as well as to achieve the desired aesthetic effect.