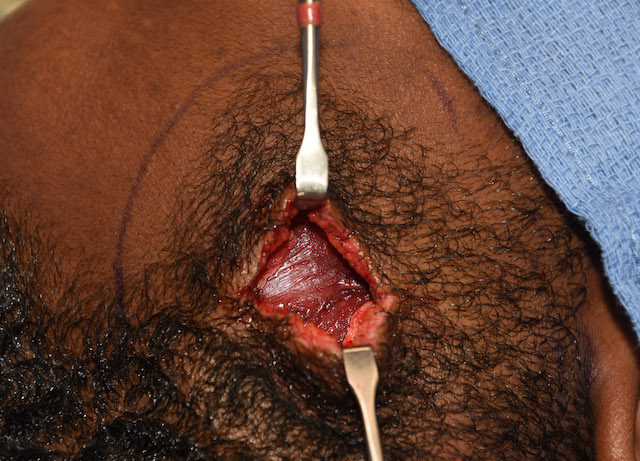 Background: The width of the side of the head is controlled by muscle and not bone. This is a revelation for most patients as the belief is that the thickness of the temporal bone is what makes the head wide. But a look at the anatomy reveals that the bone is actually deeply concave by the side of the eye and only becomes slightly convex as it passes above the ear to the back of the head. It is the thickness of the temporal muscle that makes a greater contribution than the bone between the ear and the eye anteriorly and an equal contribution to that of bone above the ear posteriorly.

This recognition of the contribution of the temporal muscle to a wide side of the head is the anatomic basis for the posterior temporal reduction procedure. This highly successful head reduction procedure removes the entire thickness of the posterior temporal muscle to change a convex side of the head shape to a straight one. And it does so without causing any functional restrictions to lower jaw opening and closing.

But when the excess width of the head extends more anteriorly across the concave temporal bone between the ear and the eye, complete muscle removal is neither feasible or practical for width reduction. The muscle is quite thick in the anterior temporal region and also has a more direct role in lower jaw motion. An alternative muscle reduction strategy is needed. 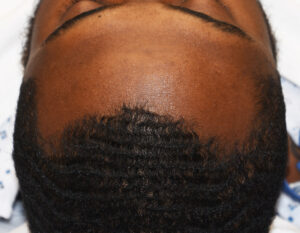 Case Study: This male had congenital asymmetry between the anterior temporal regions with the right side being bigger than the left. It could be seen that this asymmetry was due to a greater muscle thickness on the right sides evidenced when he put his teeth together. 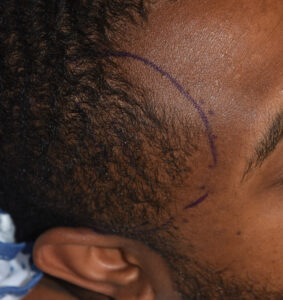 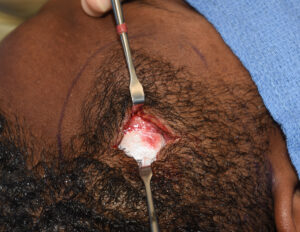 Under general anesthesia a 4 cm vertical skin incision was made in the middle of the anterior temporal scalp. Dissection was carried down to expose the deep temporal fascia. 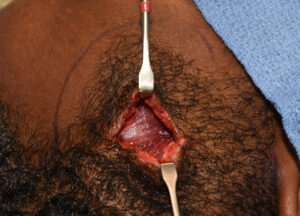 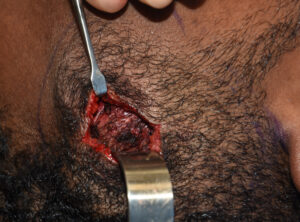 The fascia was opened in a vertical and horizontal fashion to expose muscle which was initially treated by electrocautery in a wide arc around from the fascial opening. Once all visible muscle surfaces were treated a vertical wedge of muscle was taken and the fascia closed, bringing in all four corners. This fascial closure is important to dampen down the muscle and help with controlling its postoperative swelling. 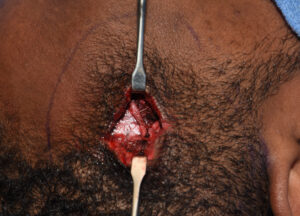 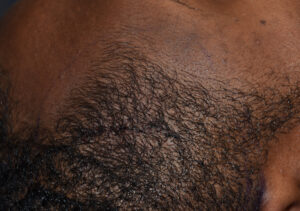 The skin was closed with small dissolvable sutures making its appearance hard to detect. The immediate intraoperative result showed a negligible change as was to be expected. 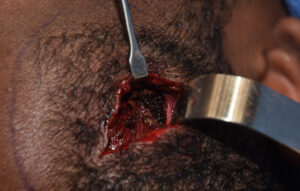 Electrocautery treatment of muscle causes its reduction by muscle fiber atrophy from the thermal injury. How much to cauterize the muscle surface is not an exact science . But given the thickness of the anterior temporal muscle An aggressive cautery approach is needed. It can take up to three months after the procedure to see its full effect.

2) The anterior temporal muscle must be approached directly and treated primarily by thermal muscle reduction rather than wide excision.