Background: Breast implants can change many feature’s of one’s breasts including obvious size and creating a rounder and fuller shape. But there are other characteristics of  the breasts in which they can not and may even make some features worse. If the nipples, for example, are horizontally at two different levels initially, augmentation will usually make them become more horizontally askew.

One such issue to play particular attention to is that of the spacing between the breasts prior to breast augmentation. Most women expect that the enlarged breast mounds will naturally bring the breasts closer together and create braless cleavage. In reality this rarely occurs in submuscular implant placement as the sternal attachments of the pectoralis muscle will simply not allow the implants to go that far medially. Cleavage can be created if the implants are placed above the muscle (subglandular) as there is no muscular obstruction to their pockets being made closer to the sternum. (but with that positioning comes other potential complications)

Case Study: This 33 year-old female wanted larger breasts but was particularly focused on ending up with cleavage as well. She had a large sternal gap between her breasts with nipples that were oriented more to the sides of her chest wall. It was pointed out to her during the consult that this was an outcome she should not expect. 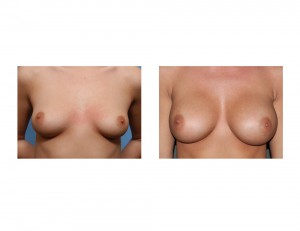 Under general anesthesia, she underwent silicone gel breast augmentation through an inframammary approach. Gummy bear breast implants of 450cc size were placed using a funnel insertion technique. Care was taken to not develop much of a lateral pocket and keep most of the pocket dissection towards the sternum with release of some of the pectoralis muscle fibers. 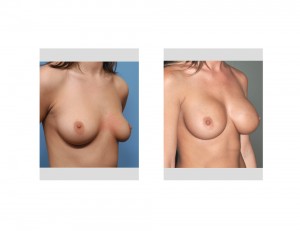 While some or better cleavage can result in some cases of breast augmentation, women should not come to expect it. Subglandular placement and large implants can make cleavage but that is not what most women usually want for their breast augmentation procedure. Any better inward positioning of the breast mounds should be considered a bonus but may not always predictably occur.

1) Breasts that are widely spaced often will maintain that wide spacing after breast augmentation.

2) Breast augmentation patients should not expect that cleavage will result from the placement of breast implants.

3) The best way to try and close a sternal gap in breast augmentation is to medialize the implants as much as possible without overdoing the muscle release.