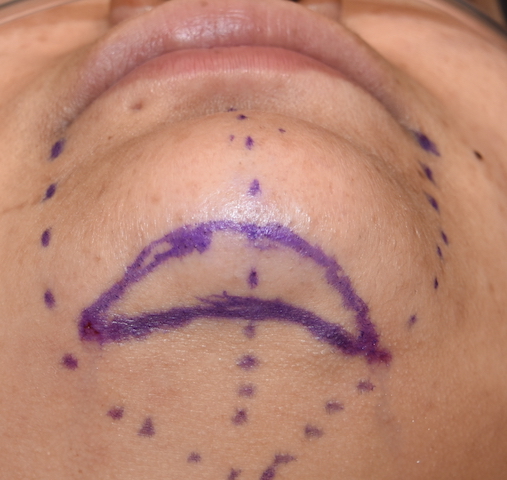 Background: Unlike chin augmentation chin reduction surgery is different in many ways. First reducing the chin is done far less frequently than making it bigger. Second, it is almost exclusively a gender specific procedure (female) whether that is in the cis-female or the transgender male to female patient. Lastly, the component that is mainly excessive in the large chin is the bone with the soft tissue being a more minor element of it in most cases.

In chins that lack natural adequate vertical height, the soft tissue chin pad can become compressed and pushes forward more than normally. This is a genetic type of chin pad excess. In patients that have had bony chin reductions and the enveloping soft tissue fails to shrink around the reduced bone (which is common), this is an iatrogenic chin pad excess. 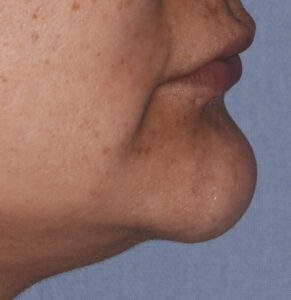 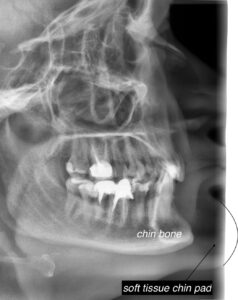 Case Study: This female had long been bothered by her protrusive chin. Her lower face has a flat mandibular plane angle which was confirmed by a lateral facial x-ray. The lack of vertical chin height creates a protrusive chin pad which could be appreciated in her x-ray. Even though the front end of the soft tissue chin pad was cut off in the x-ray because it stuck out too far, the simulated end of it show how far it was behind the front end of the soft tissue pad and that of the chin bone. She preferred a soft tissue chin pad reduction as opposed to a vertical chin bone lengthening. (the end of the chin bone was actually turned up magnifying its shortness) 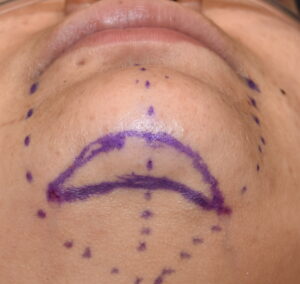 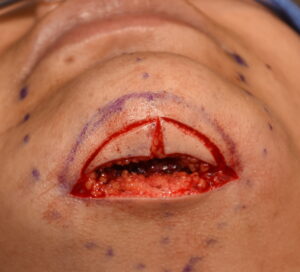 Under IV sedation a submental soft tissue chin pad reduction was done using a crescent-shaped excision pattern. A wedge of skin, fat and muscle was removed (always undercut the extent of the anterior crescent line) and primary closure done. 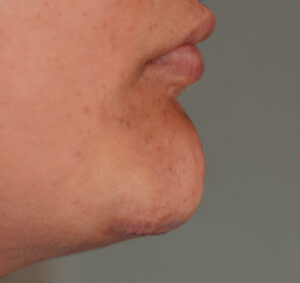 This reduced some of the horizontal projection and eliminated a soft tissue overhang. It is important to pay attention to the location and length of the submental scar line from the excision to prevent it from becoming too lateralized.

Excessive soft tissue chin pad requires direct excision. It creates its biggest effect by deprojecting the chin to a modest degree and creating a smoother submental transition from the neck into the chin pad. Over resection must  be guarded against to avoid the scar line rotating too far upward and also pulling down on the lower lip.