Background: The eyeballs or globes are encased with a near circumferential rim of bone for protection. This orbital rim protection stops short of the nose whose central structure provides medial eye protection for both eyes. As a result the eyes, and its most anterior cornea, are typically behind a vertical line laid across the superior and inferior orbital rims. This would be called a positive orbital vector which the majority of people have.

When the eye protrudes beyond this vertical line, of which this can occur for a variety of anatomic and pathologic reasons, it is called a negative orbital vector. Such a negative orbital vector most commonly occurs from an aesthetic standpoint because the rim of bone around the eye is deficient in some aspect. This is very commonly seen when the infraorbital rim-cheek bony complex is underdeveloped and horizontal recessed. It can also occur from the superior orbital rims (brow bones) although far less commonly so.

Such periorbital bony deficiencies often create the appearance of prominent eyes or excessive globe exposure. This is not usually significant enough to qualify as true exophthalmos as seen in numerous pathologic conditions but can be considered for lack of a more formal term, aesthetic exophthalmos. Improvement can come from building up the bones around the eye which historically is thought to not be possible. But with computer implant designing and thoughtful incisional planning, periorbital rim augmentation is possible. 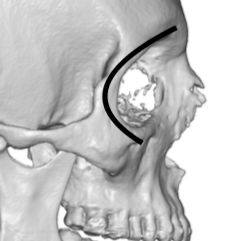 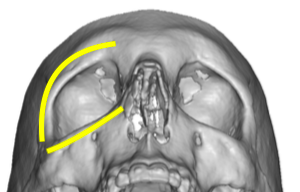 Case Study: This male desired to have stronger brow bones and infraorbital rims. Aesthetically he had infraorbital hollows and visible lateral brow recession with a reasonably strong central glabellar region. The shape of the orbits can be seen to angle backward laterally. 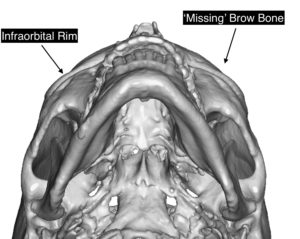 When viewed from the submental view the brow bones were not visible. They should normally have greater horizontal projection than that of the infraorbital rims.

Near circumferential implant augmentation was designed using his 3D CT scan to cover the complete brow bone and lateral infraorbital rim areas. They came close but did not meet at the lateral orbital rim area. To properly increase the rim projection they were designed to engage the orbital rims on their inner side. This also closed down the circumferential space to some degree.

Averaging 3 to 5mms projection around the orbital rim increased central and lateral orbital projection by about 30%. 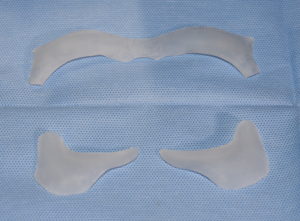 The implants were surgically placed using a three incisional technique. Superiorly from the scalp a 3 cm incision was made centrally through which the brow bone pocket was created through an endoscopic technique. Then through the lower eyelids the infraorbital rim implants were placed. Positionally the two ends of the implant along the lateral orbital wall were referenced. 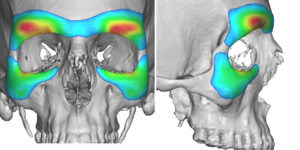 Periorbital rim augmentation can be effectively done through custom implant design and careful incision planning and surgical placement. Any time this extent of the orbital rims are dissected in a subperiosteal fashion the patient show expect some significant postoperative swelling and bruising in the recovery process.

3) Periorbital augmentation can increase projection distances of around 30%.