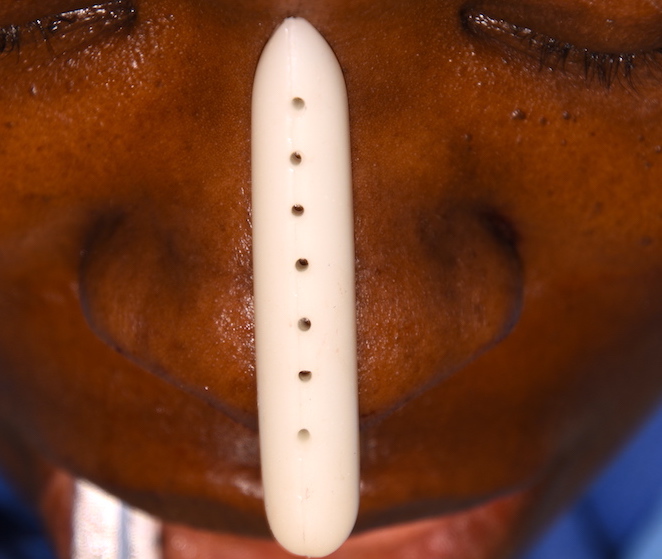 Background:  One of the classic debates in augmentative rhinoplasty is whether it should be done by either an alloplastic or autogenous technique. This debate has gone on for many decades and the reality is that it is not really a debate at all. Rather it should be a discussion of the advantages and disadvantages of either method based on how they apply to the patient’s specific nasal augmentation needs. This becomes most relevant when the augmentation needs are significant where the autologous approach is going to require a material volume that only a rib graft can provide. This always gives the patient pause and the implant concept no longer seems so ‘foreign’.

Significant nasal augmentation is best thought of as the need for a complete dorsocolumellar profile change. The nasal bridge needs to be raised and the nasal tip needs to be elevated as well. This is most commonly seen in the African-American and Asian nose although not exclusively so. For such patients when a rib graft is off the table for them, an implant has to be used. Success with nasal implants is multifactorial including material choice, implant shape/size as well as placement technique. But the one constant feature of success is that the implant should be kept out of the nasal tip area. Readily available septal and ear cartilage should be used for the tip work. Thus even a so called implant rhinoplasty in the dorsocolumellar augmentation patient is not done all by the implant alone. (or at least shouldn’t be) 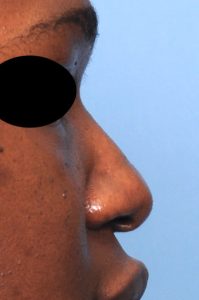 Case Study: This female desired to improve the overall shape of her broader and flatter nose. She had very thick skin, low and broad nasal bones and deficient and weak tip cartilages. 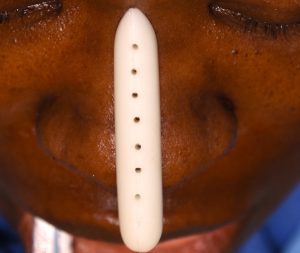 Under general anesthesia and through an open rhinoplasty approach, the nasal bridge (dorsum) was built up by a large nasal silicone implant. To help prevent postoperative implant shifting midline 2mm perfusion holes were placed through the implant using a dermal punch. The implant stopped short of the nasal tip just into the supratip area. 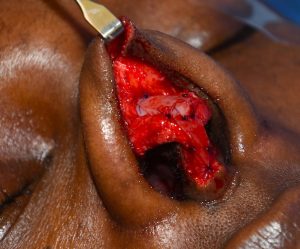 The nasal tip area was built up with a columellar strut and a multilayer onlay tip graft using septal cartilage. 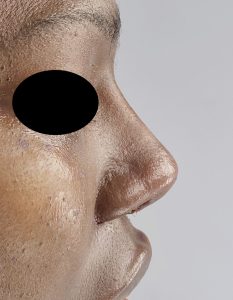 Her intraoperative results showed the immediate effects of the dorsal implant placement and the cartilaginous build up of the nasal tip. (dramatic increase in opening of the nasolabial angle and in tip rotation/refinement)

Higher success rates occur in facial implants when they are judiciously applied and good sizing and surgical technique is done in their placement. When an implant is ‘asked to do too much’ this is a frequent source of postoperative complications. Because of the thin soft tissue cover of the nose there is a limited margin of error in the nasal implant patient. Even though placing it seems much simpler than any other facial implant it is important to remember that the implant:natural tissue ratio is the highest of any facial implant site. Thus it is an easy area in which an implant can be forced to take on a bigger role in the nasal augmentation that it should. This is why nasal implants should be limited to the dorsum where the overlying tissues are less likely to be devascularized.

3) While nasal implants can provide a powerful augmentation effect they should be kept away from the tip where implants, because of their soft tissue pressure effects, are far less tolerated.