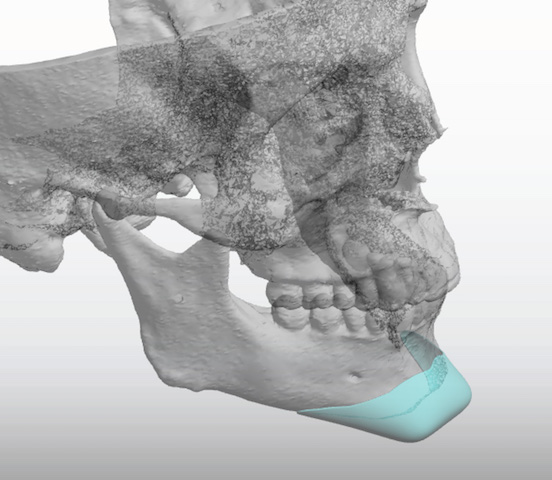 Background: A strong male jawline is an important aesthetic feature that has long been recognized as part of an attractive face. The jawline is essentially composed of three corners (chin and jaw angles) whose degree of prominences determines its external appearance. While the jaw angles has more recently been recognized as an important jaw feature that can be surgically manipulated, the chin has been so for a long time. Many styles and sizes of chin implants exist and are the most extensive of the facial implant options.

The external shape of the chin is a function of the underlying bone and the overlying soft tissue. The thickness of the soft tissue chin pad always blunts the shape of the underlying bone to some degree. Many men actually have a somewhat square shape to their chin even though it appears on the outside as more round. For decades efforts have been made to make male chins more square through implant shapes in chin augmentation surgery. These have been moderately successful for some men who are satisfied with a slightly square effect but not for those who seek a more prominent square shape result. .

Only a custom chin implant design can a strong square chin effect. Besides the square shaped the implant design its effect is enhanced by having more than just an increased horizontal projection. Some amount of vertical lengthening is needed as well. All of these dimensions combined helps to stretch out the soft tissue chin pad allowing what lies underneath to be more effectively seen. 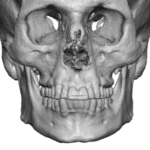 Case Study: This young male was interested in having a chin implant for his weak chin but also wanted it to be square. His chin shortness was mild in the side view but his lower face also appeared vertically short as well. His 3D CT scan showed a mild horizontal chin shortness, a low mandibular plane angle and a square bony chin shape with some asymmetry. 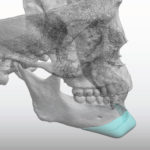 A square custom chin implant was designed that provided equal amounts of horizontal and vertical chin lengthening with a very square shape to the front of the implant design. 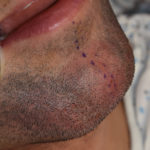 Under general anesthesia and a submental skin incision approach the custom square chin implant was placed and secured with two long 2.0mm screws at the corners. He had an immediate square chin effect.

When adding a vertical component to any chin implant design, it becomes important to be aware of whether the soft tissue chin pad can stretch to get over the implant without creating a ‘double roll’ effect. (soft tissue chin pad sits on top of the edge of the implant rather than over and under it) There is no exact clinical method to determine that before surgery. But I have learned in custom chin and jawline implant designs to consider the additive increases of both the horizontal and vertical increases. It is always safe to not exceed the number of 10 and the most you should ever go is 15…unless there is a chin implant already present that is going to be replaced.

1) Mant men have a natural square shape to their chin bone but it does not show through the soft tissue.

2) Making a square chin requires a combined horizontal and vertical chin extension with a square shape.

3) When combined vertical and horizontal lengthening of the chin is done it is important that the soft tissue chin pad is capable of stretching over it.