Background: The outside shape and appearance of the nose is directly influenced by the underlying ostecartilaginous framework. This is seen from the paired nasal bones in the upper third of the nose to the complex cartilage structure of the nasal tip. This is also true for the open spaced of the nostril which is border by skin and cartilage like an equilateral triangle on each side.

The nostrils may be an empty space but their shape is important to the look of the nose. Their bilateral presence has a major impact on the perception of nasal symmetry. Their shape is mainly influenced by the shape of the lower alar cartilage from the medial footplate and crura at their midline to the superior curvature down to the attachment of the nostril to the face. While the lower alar cartilage does not parallel exactly the skin along the alar rim, it nonetheless influences its shape by the structural support it provides.

Alar rim restraction or notching is a well known nostril deformity. It presents as excessive nostril exposure and is defined as when the distance between the alar rim and the long axis of the nostril is greater than 2mms. It most commonly occurs from an open rhinoplasty procedure. It occurs from either cephalic trimming of the lower alar cartilage with reduced resultant support, scar contraction from the open procedure or some combination of both. But it can also occur from other causes including trauma to the tip of the nose. Some people also have it naturally. 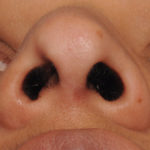 Case Study:  This female was involved in a motor vehicle accident that caused multiple facial injuries including blunt trauma to her nose. Six months after the injury an open rhinoplasty was performed to rebuild the tip of the nose with septal cartilage grafts. While this provided major improvement, one residual deformity remained…a right unilateral alar rim retraction.

Under general anesthesia a right ear chondrocutaneous graft was taken from the superior concha just under the antihelix. A marginal incision was made and the skin released. The graft was sewn into the resultant defect created by the skin release.

At six weeks after surgery the alar rim retraction was improved.

1) Alar rim retraction most common occurs from a prior rhinoplasty due to lower alar cartilage resection…although it can also occur from trauma and some have it naturally.

2) Retraction of the alar rim represents a combined cartilage and nasal lining defect.

3) The best treatment for retraction of the alar rim is a chondrocutaeous graft from the ear.