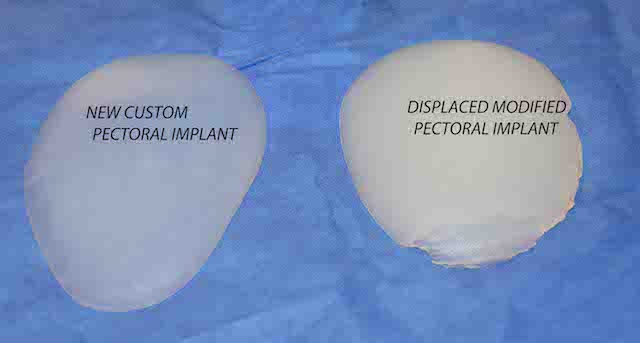 One similarity that they also share is that of the risk of postoperative implant asymmetry. The creation of paired pockets on the chest wall right next to each other is one of the surgeon’s challenges to make the implant sites as symmetric as possible. While both breast and pectoral implants share this risk, it is lower in pectoral implants due to the more stable chest wall tissues and its confinement into the more defined intramuscular pocket.

Correction of pectoral implant pocket asymmetry is typically approached through an inframammary incision. While this is not such an aesthetic issue in women due to the more hidden inframammary fold, it could be aesthetically more obvious in men who do not have an overlying enlarged mound above it. But it is the best approach to reduce asymmetry due to an enlarged pocket that has become extended beyond the lateral pectoral muscle border. 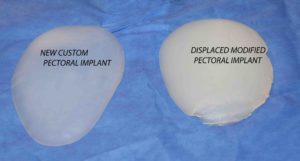 Under general anesthesia and in the supine position, the existing lateral inframammary scar was opened. Right beneath the incision the implant and its pocket was located, way below the lateral pectoral muscle border. The existing implant was removed and compared to the new custom implant. The new implant was then inserted in the correct orientation and the implant pocket closed down to its correct position with permanent sutures along the lateral pectoral muscle line.

One of the key differences between pectoral and breast implants is the location of the pocket. Since the pectoral implant is designed to augment the muscle, the implant needs to stay completely within the limits of the border of the muscle. This is easy superiorly and medially since the origin of the muscle is very hard to detach. But it is fairly easy to go beyond the inferolateral muscle edge since it is more open with less tenuous tissue attachments. This is important with the initial placement of pectoral implants and equally so should any revision of them be needed.

1) Pectoral implant asymmetry is one potential risk of the procedure and can be difficult to correct/impossible to correct from the standard insertion incision.

2) 3D CT scanning is the best preoperative method to determine both the implant style and size as well as its exact positioning compared to the opposite side.