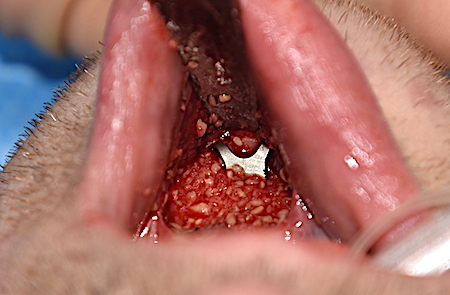 While this resultant chin contour deformity from a sliding genioplasty has been known for a long time, it is usually viewed as insignificant. While in small advancements this bony deformity may have little consequence that is certainly not a valid interpretation of it in larger advancements. The bony step-off really represents dead space which is ultimately filled with soft tissue collapse into it. This can lead to potential issues such as persistent postoperative chin tightness, abnormal mentalis muscle movements and lower lip tightness or retraction. While the deepening of the labiomental fold is typically viewed as an expected aesthetic sequelae it is an external indicator of this soft tissue collapse.

Filling in the bony step off to eliminate the dead space and recreate the more normal profile of the anterior surface of the chin makes sense as long as it does not create other problems. While bone grafts harvested from the patient is the best material for this task, few if any patients want a donor site for an aesthetic chin surgery. The next most logical choice is allogeneic or tissue bank bone which avoids a donor site and creates a lattice-like surface in the exposed marrow spaces of the cut chin edges.

Under general anesthesia and through an anterior vestibular incisional approach a low level minimally angulated horizontal osteotomy was done. A 12mm step chin plate was applied with a slight bend in the screw legs to get the vertical lengthening effect. At the start of surgery a 5cc container of allogeneic corticocancellous bone chips was mixed with an 80mg solution of gentamicin and allowed to soak until its use. The entire 5ccs of graft was applied along the interbony gap out to the end of the osteotomy wings but was also used to cover the central plate as well. A two layer muscle was done over the graft with a final mucosal closure. 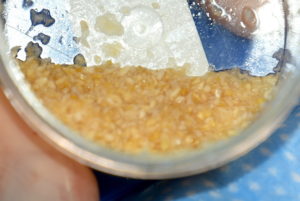 The use of allogeneic bone chips may also expedite the rate and completeness of bony healing between the two cut chin ends…which are no longer in direct alignment. But they undoubtably help prevent soft tissue collapse into the step deformity regardless of how much of the graft ingrown with bone.

1) A sliding genioplasty always leaves behind a bony defect and an unnatural profile shape, particularly in large advancements

2) Filling in the bony step-off and the osteotomy gap helps fill dead space and create a more natural contour.

3) Allogeneic chip bone grafting is the most logical choice in aesthetic chin surgery.