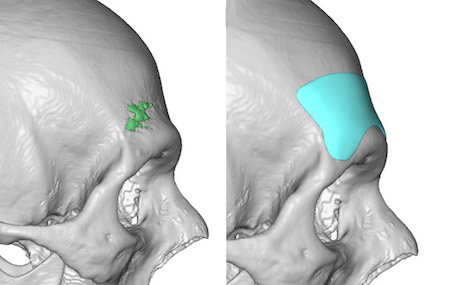 Background: The overgrown or prominent brow bone in a male is most commonly treated by a brow bone reduction procedure, usually a setback bone flap technique. While this is a very effective operation, it almost always requires a superior or scalp incisional approach. For many men, particularly older men, this may not be a viable option considering their hair coverage. The male who shaves his head is the most significant example of when a brow bone reduction procedure can not be done. (unless it is done hrough a horizontal wrinkle line)

The shaved head male, even if a brow bone break implant offers an aesthetic improvement, still needs to have a scar acceptable location for insertion. The use of horizontal forehead wrinkle lines and vertical glabellar furrows offers access through which a virtual scar already exists.

Case Study: This middle-aged male had prominent brow bones but was not a good candidate for brow bone reduction due to his shave head. It was determined that he was a good candidate for a brow bone break implant by prior injectable filler treatments and computer imaging. He also had a single deep vertical glabellar furrow which Botox and injectable filler injections could not solve.

Under general anesthesia and through his vertical glabellar furrow a subperiostea pocket was made along the implant’s outline. The implant was inserted, positioned in the midline and secured with bilateral 1.6mm screws at the medial part of the implant.

The deep glabellar furrow was also treated by the addition of a 2mm thick ePTFE intraoperatively fabricated implant which was secured to the brow bone break implant. The overlying glabellar soft tissue and skin was treated like a scar revision for closure.

1) In the male with an indistinct hairline or a shaved head, a traditional brow bone reduction is usually not an aesthetic treatment option.

2) Smoothing the transition between the brow bones and the forehead (brow bone break) could be a viable treatment option if the brow bone protrusion is not overly severe.

3) The placement of the custom brow bone break implant can be placed through an existing deep glabellar furrow in the older male.