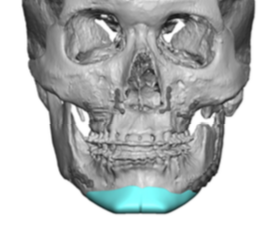 Background:  The lower jaw develops from paired cartilage outgrowths known as Meckel’s cartilage which meet in the middle to create the arch shape of the bone. These two segments become joined at the symphysis or chin which, if everything forms perfectly, is symmetric in shape. Whether the chin is small, medium or large in size, symmetry is one of its very important aesthetic features.

Fortunately, due to the wonders of the embryologic process, the majority of people have a symmetric chin. But in those who don’t most of the time it is due to asymmetry of the jaw behind the chin as one side of the jaw has developed a bit differently from the other. Usually this difference is due to undergrowth or hypo plastic development. The shorter side of the jaw either causes a deviation of the chin to that side or has caused more of a vertical height difference on the affected side.

When chin asymmetry is associated with an overall jaw asymmetry, orthognathic surgery is often the treatment done to create an improved occlusal plane and interdigitation. With this occlusal alignment often comes improvement of chin and jaw asymmetry but usually not with complete correction. 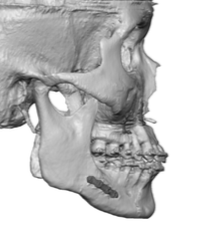 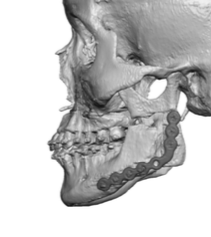 Case Study: This male presented with a desire to not only improve his chin asymmetry but have an overall chin augmentation effect as well. He had a prior history of orthognathic surgery, specifically bimaxillary surgery. While the LeFort osteotomy was a standard horizontal level I osteotomy cut, the lower jaw had a unique combination of a right sagittal split and a left inverted L cut osteotomy. While a more standard plate and screws were used one the right side, the left side was fixed with a large reconstruction plate and screws. 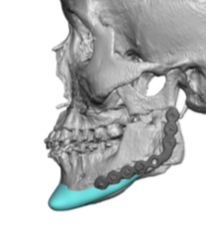 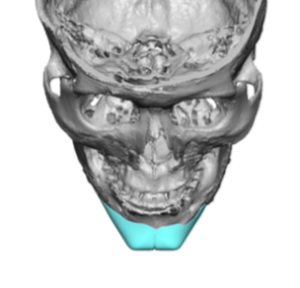 His chin asymmetry could be seen to be left side based, the same side on which the inverted L osteotomy was done. Using computer imaging it was determined that a combined horizontal, vertical and width dimensional increases was needed in which only a custom chin implant design could create these type of unique dimensional changes. Nearly equal amounts of horizontal (5mm) and vertical (4mm) augmentation was designed in a chin implant with a square shape. For a complete correction of the asymmetry a jawline extension was needed on the left side. 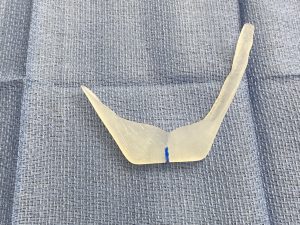 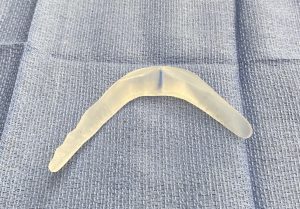 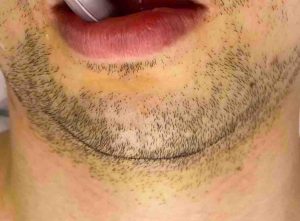 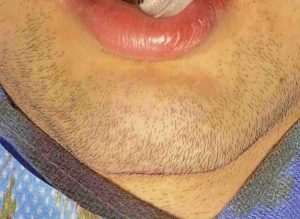 While the chin has no functional purpose, and humans are the only mammals on earth with a chin, it is the most projecting point of the lower face. Its degree of projection, shape and symmetrical appearance are its three key aesthetic features. When specific 3D augmentative changes are needed for a chin augmentation effect, specifically when developmental asymmetry exists, only a custom chin implant design can sufficiently meet these aesthetic needs.

2) A custom chin implant can correct both chin and inferior border jawline asymmetries.

3) When custom chin implants have long extended wings they should be made of a stiffer durometer for a more assured placement.