Background: The shape of the forehead is well known to be gender-specific. Women usually prefer smooth convex foreheads with no obvious brow bone prominences. Conversely, men usually desire evidence of a brow bone with a break into the mid-forehead with a more retroclined  shape into the upper forehead. While I have seen males and females cross these classic forehead shape differences with iterations in between, these general preferences remain.

The male forehead shape is more ‘complex’ than that of the female. With brow bone prominences that stick out further than the central forehead, combined with a slight glabellar indentation, the male forehead has more subtleties in its shape. Changes in these subtleties can result in aesthetic imbalances that cast shadows or create undesired profiles.

When men have too much brow bone protrusion it can make the mid- to upper forehead look too far back. Conversely, a recessed forehead can make the brow bones look like they are too big. This is an important distinction to make as the treatment approaches to either one are very different. Computer imaging can help make the diagnosis as to whether it is the forehead or the brow bones that are the source of the aesthetic concern.

Case Study: This middle-aged male did not like the shape of his forehead. He liked the amount of brow bone prominence that he had but felt the central forehead directly above it was too recessed. This created an unaesthetic shadowing which he desired to be improved/eliminated. 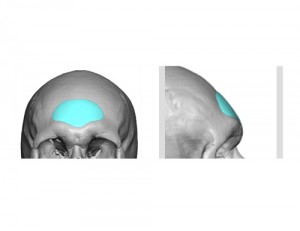 Using a 3D CT scan, a custom forehead implant was made to fill in the central depression. Its shape had an extension that went into the glabellar indentation and it blended into all the other forehead area with a fine edge taper. (< 1mm) Its greatest thickness at its midportion was 4mms. 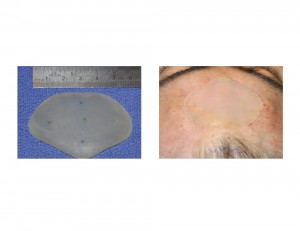 Under general anesthesia, a small zig zag incision (3cms) was made between the hairs just behind the frontal hairline.  A subperiosteal pocket was developed through this incision, taking it just to the limits of the presurgical marks on the forehead. The custom implant was prepared by making five 2mm holes through the implant. (perfusion/fixation holes) The implant was easily inserted, positioned and the scalp skin closed with resorbable sutures.

While the type of custom implant is small, it is the most accurate method to create a smooth central forehead augmentation. Other methods of forehead augmentation exist, such as bone cements, but they require longer incisions to insert and the risk of edge transition visibility/palpability is higher.

2) The simplest and most reliable form of forehead contour augmentation is with the use of a custom forehead implant which can be done through the smallest incision and the least invasive procedure.

3) ‘Prominent’ brow bones in men can be artificial as the real bony problem is a backward forehead slope or depression above the brow bones.