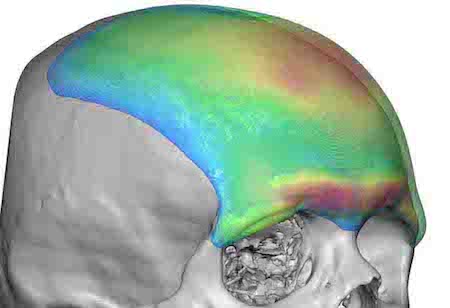 Background:  The forehead is a broad comparatively flat surface area for the most part with the exception of the lower brow bone area. In women the brow bone area has little if any protrusion and thus has no aesthetic significance. In men, however, the medial protrusions caused by the pneumatized development of the underlying frontal sinus are a distinguishing male feature. The degree and angle of the medial brow bone protrusions can be debated but the aesthetic significance of their presence can not.

In male forehead augmentation the first consideration is whether the brow bone needs to be included or not. In men with good brow bones but a very backward sloped forehead designing the implant just to the edge of the brow bone break is what is needed. But lack of much brow bone projection mandates that the implant design become a complete forehead that includes the brow bones as well.

In designing the male brow bones of a custom implant, whether it includes the forehead or not, is not quite as structurally simple as it seems. While on first glance the brow bones may seem to be just a straight line horizontal projection, looking at their anatomy shows a much more complex topography. It has a gulping shape that is shallowest in the middle (frontonasal junction), has the most horizontal projection around the supraorbital notch and fades evenly out to the junction of the lateral orbital rim.

Case Study: This young male desired to have a combined forehead and brow bone augmentation. He had a prior history of a custom forehead implant to correct his backward sloped forehead but it only had a very limited brow bone cmponent. As he looked at the result over the past year he came to realize that he wanted a more significant brow bone component of it. 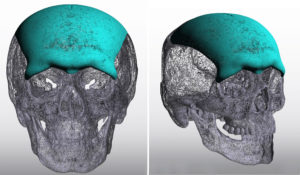 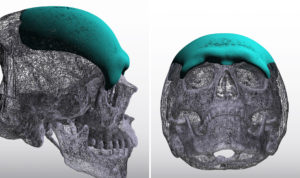 In designing the brow bone part of the implant it it become important to mimic the shape of the natural male brow bone which shows many unique features. The inferior end of the brow bone design was brought 3mms lower than the natural inferior supraorbital rim bone level.

Under general anesthesia an evaluation of his previous scalp incision showed a nearly imperceptible scar even on the closest of inspections. After removal of the first custom forehead implant it was compared to the next implant. An endoscopic technique was then used to release the lower end of the brow bone capsule which is where the new implant most extended. (besides posteriorly and over the edge of the temporal lines)

Perfusion holes were applied in the implant where the hair-bearing scalp existed. It was then rolled for insertion, unrolled once onside, and positioned inferiorly over the brow bones and secured with small screws at the incisional level.

Men can seek multiple variations of custom forehead implants from a forehead only, brow bone only or a combined forehead-brow bone implant. Men are becoming increasingly aware of the aesthetic value of brow bone prominences, particularly a prominence in which the brow bone has an enhanced anterior-inferior projection. In so doing one needs to be aware of the topography of the brow bones and its more complex gull wing shape.

1) Male forehead augmentations often include the brow bones as well.

2) The shape of a brow bone part of a forehead implant involves complex topography that show mimic that of the natural male brow bone protrusions.

3) A combined custom forehead-brow bone implant can be placed through a relatively small scalp incision.