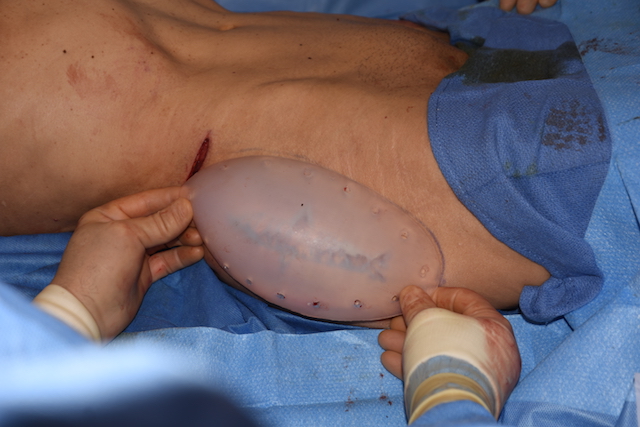 Background: Successful buttock augmentation can be done with either fat injections or implants. But in very thin patients fat injections are not a buttock augmentation option ad implants have to be used. In such thin patients the best location for buttock implants is in the intramuscular location. This provides the best camouflage of their outline as well as decreasing the risk of complications in both the short and long run.

But once successful buttock augmentation has been achieved some patients will turn their focus to the hips…which now looks even more deficient by comparison. While it is logical to try and do hip augmentation by fat injections, if there is no enough fat for the buttocks there will rarely be enough for the hip. And even if there was the retention of fat transfer to the hips is way inferior to that of the buttocks.

As a result implants are the only reliable method for hip augmentation. But there are no standard hip implants and the clinical history of their use is very limited compared to that of buttock implants for example. Hip implants designed and made for each patient based on external measurements is the best approach to not only provide the needed surface area coverage but also to work in and around any indwelling buttock implants.

Case Study:  This very thin, tall and athletic older female had a prior history of two intramuscular buttock implant procedures with a current size of 650ccs. This left her hips very deficient with a straight line profile in the front view. Custom hip implants were designed using an ultrasoft solid silicone material with a length of 22cms, a width of 14cms and maximum projection of 2 cms located in the midline at the upper third of the implant. The placement of the hip augmentation was to start just below the iliac crest….a high hip augmentation effect.

Under general anesthesia and in the supine position, a 4 cm skin incision was made in a horizontal skin crease. Interestingly the patient’s position pushed out the buttock implants more towards the hips and appearing to be a bit in the way. A deep subcutaneous pocket was developed onto the TFL fascia over the external skin markings of the implant outline. The implant was prepared for implantation by placing 6mm perfusion holes around the entire perimeter. On the underside of the implants partial thickness wedges were made both vertically and horizontally. Coincidentally the wedge excision pattern appeared like a fish (shark) seen on both the underside as well as through the translucent implant material. The implants were placed as designed over a drain and the incision closed in layers.

custom hip implant video 1 Dr Barry Eppley IndianapolisCustom hip implants can provide needed contours that can supplement that of prior buttock augmentation. But their design must often be individualized to fit the patient’s body as well as work around the location of buttock implants. While it would be ideal to place hip implants under the fascia this pocket location is precluded in high hip augmentations due to the tight adherence of the fascia over the trochanteric head. With the buttock implants being in an intramuscular location, there is no risk of pocket merging and inadvertently creating communication between the two implant sites.

2) To improve tissue adherence and prevent postoperative migration of hip implants the intraoperative addition of perfusion holes has merit.

3) Cutting wedges into the underside of hip implants is another method of improving pocket adherence.