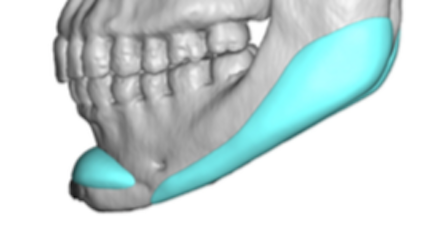 Background: V line surgery is a popular form of lower facial reshaping focusing on reducing the size of the lower jaw. It is essentially a removal of the inferior border of the lower jaw from the jaw angles up to the chin. The chin is then reshaped by various forms of t-shaped osteotomies to narrow and often bring it further forward to complete the lower facial tapering effect.

While V line surgery is very effective it has its own unique set of aesthetic complications. The two most recognized ones are over resection (too much bone removed) and bony irregularities/asymmetries. Despite the measured nature of the procedure, differences in the levels and line of the jawline bone cuts between the two sides is not rare. Evening out such jawline asymmetries is very difficult if trying to do so by removing more bone in a secondary procedure.

It is far more effective to smooth out the jawline bony differences by addition…but not too much addition so that it does not put back too much bone structure. 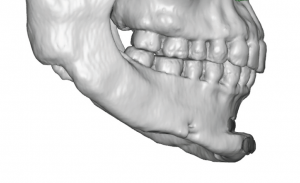 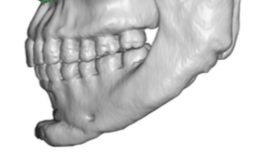 Case Study: This female had been through a prior V line surgery which left her with multiple areas of jawline bone irregularities and asymmetries. A 3D CT scan showed these differences clearly. 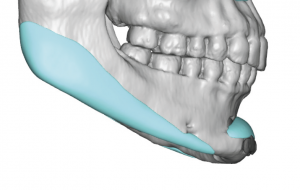 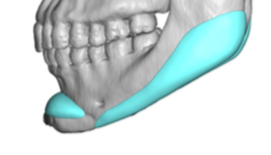 Using her 3D CT scan thin jawline implants were designed that smoothed the inferior borders and made them more symmetric. A small implant was design to fit on top of the sliding genioplasty in the step off to add some fullness to the soft tissue chin pad.

Under general anesthesia and though her existing intraoral wraparound vestibular incisional scar, all three implant were secured with small screws.

Custom jawline implants can be used to totally, partially or just to smooth out the jawline after V line surgery. For any of these postoperative jawline changes it requires great precision to get just the right amount of outback augmentation and making it symmetry between the two sides.

1) The bilateral and intraoral nature of V line surgery can create jawline asymmetries and irregularities.

2) Restoring a smooth jawline can only be done by a custom implant design to smooth and even out the two sides of the jawline.

3) The goal of custom jawline implants is to smooth out the jawline and not restore it to its original size/shape.