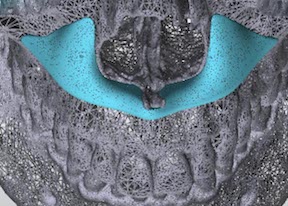 Background:  One of the smaller and least recognized areas of facial augmentation is the central nasal region. Reasons for augmenting the base of the nose are for general midface retrusion or flattening but can also be done to improve the nasolabial angle/upper lip projection or to soften deeper nasolabial folds at the alara-facial junction. Premaxillary and paranasal augmentation historically was introduced as an adjunct to rhinoplasty often in Asian patients. But today it is used in a wide variety of patients and the potential aesthetic benefits of this area of facial augmentation has developed increased awareness due to the popularity of injectable fillers.

Premaxillary and paranasal implant styles have been around for decades but have been dominated by one standard implant design, the pyriform implant. This is a combined premaxillary-paranasal implant design that encircles the lower pyriform aperture or bone that surrounds the nasal cavity. Centrally it crosses the anterior nasal spine and extends laterally up along the bone staying medial to the canine fossa. Externally its effects are to push out the based of the nose from the columella centrally to the attachments of the nostrils laterally. While this is not a complex implant design per se, subtle variations in its design can determine  how it feels externally to the patient. (or whether they can feel it at all)

When augmenting the bony pyriform aperture it is important to recognize that the pyriform aperture has a concave surface laterally and a more pointed convexity centrally. Careful inspection of the anatomy shows that even in patients with good nasal base projection these surface contours remain the same. Thus any premaxillary-paranasal implant design should have edging that flows smoothly into the surrounding bone to avoid creating an unnatural ‘bump effect’.

Case Study: This young male was undergoing multiple midface reshaping procedures and want to also improve his deeper upper nasolabial folds as well as overall nasal base projection. A custom premaxillary-paranasal implant was designed that had lateral edging that flowed into the canine fossa and a central projection that fit under the anterior nasal spine. As a general rule I have found that 5mms of paranasal augmentation and 3mms of subnasal spine augmentation produces a good external aesthetic effect with no risk of being overdone particularly in the male patient. (women may be 1mm under these projections)

Looking at the 3D color mapping of the implant thicknesses shows how it has feathered edging in the paranasal areas which is really key in ensuring that the patient does not feel an unnatural bump to the side of their nose.

Under general anesthesia and through an intraoral approach, paired vestibular mucosal incisions were made that left the central frenum area intact. Subperiosteal pockets were developed that did not violate the nasal mucosa and keep the full thickness of tissue intact centrally. The implant was inserted by asking it under teh central cuff of tissue and positioning it as it was designed. One small titanium microscrew was used per side to compress the implant against the bone. Closure was in two layers, muscle and mucosa.

The combined custom premaxillary-paranasal implant can be successfully placed through two small intraoral incisions. The keys to avoiding postoperative complications are to leave a good cuff of tissue inferiorly (mucosa and muscle), leaving a central cuff of tissue intact, subperiosteal pocket development that avoids violation of the nasal mucosa and small screw fixation that avoids implant pressure on the overlying soft tissue. The implant’s design is the key to having a natural feel to the augmentation externally.

2) Successful designs for premaxillary and paranasal implants is to have feathered edges that blend into the surrounding bone.