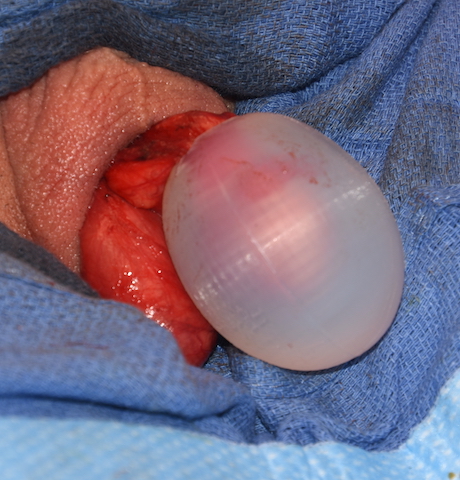 Background: The testicles in a male play both a functional and an aesthetic role. Their aesthetic role is diminished when a testicle is lost or missing and is the main reason testicular implants were developed. The placement of testicle implants into a lost space poses no ‘occupancy’ problems since they are filling a previously occupied space.

The less commonly used testicular enhancement technique is the wrap around method. This is where the implants are designed to allow the existing testicles to sit inside them, truly enlarging their size by adding a layer of implant around them. This involves first dissecting out the testicles and bringing them outside of the scrotum where the implants are placed and then reinserted. This is done when the existing testicles are not overly small and/or the patient feels uncomfortable with having ‘4’ testicles with the side by side method. 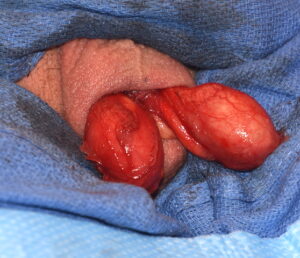 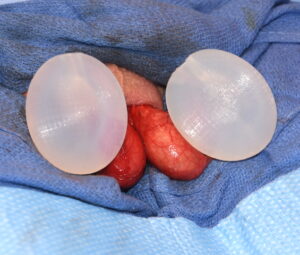 Under general anesthesia and through a midline raphe scrotal incision both testicles  were dissected out and brought outside the scrotum. 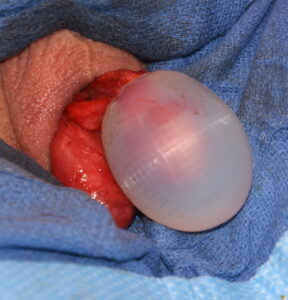 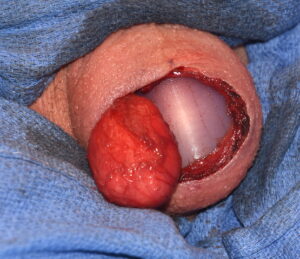 The left side implant was initially placed around the testicle and then both put back into the scrotum. 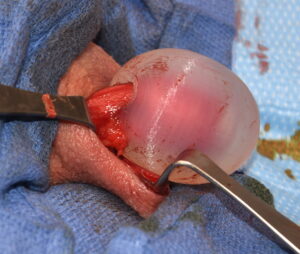 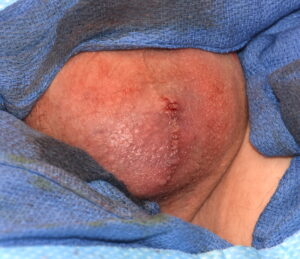 The second side is always the most challenging given the space occupied by the first implant placement. The implant opening was stretched to allow the testicle to fit inside it. The size of the hole was carefully checked to be sure it did not compress the pedicle. Once the second implant was inserted a three layer closure was done ensuring a layer of tissue remained between the two implants, essentially keeping the pockets separated.

One of the interesting questions asked about wrap around testicle implants is what is their effect on reproductive capability. (sperm production) The most accurate answer is that it is not known. It seems unlikely that any testicular function would be affected sitting inside an ultrasoft silicone implant with an intact vascular pedicle/cord. But this can only be speculated at this point in the limited clinical experience with them.

1) Testicular enhancement involves increasing the size of the existing testicles by implant using either a side by side or wrap around techniques.

2) The wrap around testicle enlargement technique involves dissecting out the testicle and placing it into a preformed implant designed to contain it with an exit hole on one end for the pedicle.