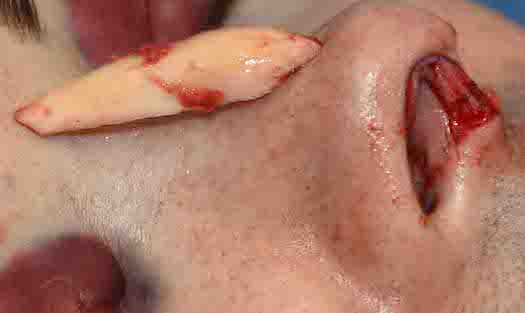 Background: Augmentation of the bridge of the nose, known as dorsal augmentation, is a common need in certain types of rhinoplasty surgeries. Low nasal bridges occur for a variety of reasons but the most common is genetic…this is just the way the nose developed. This is seen particularly in certain ethnicities such as Asian and African-Americans where short nasal bones that also lack height are common. But the nose that may benefit by dorsal nasal augmentation can present in patients of any ethnicity or gender.

Significant dorsal nasal augmentation can be done by alloplastic (implant) or autologous (from the patient) sources. When considering autologous grafts, a limited number of options exists from bone or cartilage donor sites. Rib grafts are most commonly used because of their ability to be carved and it is more similar to most of the structure of the nose hat lies underneath it. Bone grafts were more historically used and can be harvested from the skull or rib. But they are stiffer and harder to carve and may be prone to more resorption than that of a cartilage graft.

Case Study: This young male was to undergo a variety of facia reshaping procedures which included rhinoplasty as well as a chin reduction. The initial plan going into surgery was to use an implant for the dorsal augmentation part of the nose.

Under general anesthesia and through a submental incisional approach, a 5mm vertical chin reduction was performed through an inferior border osteotomy. This resulted in a horse-shaped segment of bone. When it came time during surgery to do the nose it was decided to use the chin bone harvest to shape one end of it into a nasal bone graft.

Through an open rhinoplasty after tip reshaping was completed the chin bone graft was inserted for the dorsal augmentation. Its superior end extended up to the radix and the inferior end under the reshaped lower alar tip cartilages.

Solid cortical bone regardless of the donor site can be used for dorsal augmentation if it is long and wide enough and can be properly shaped. The chin bone is a most uncommon form of nasal bone graft harvest and would typically not be long enough to be an effective graft. But the inferior border of the chin offers adequate length and a solid construct even if most of it is has as curved shape.

1) A bone graft to the nose is a well known method of autologous dorsal augmentation.

2) The source of the bone graft is not important as whether it can be fashioned to be straight and consist of solid cortical bone.

3) In this unique case a dorsal nasal bone graft was fashioned out of the bony segment removed from a submental vertical chin reduction.