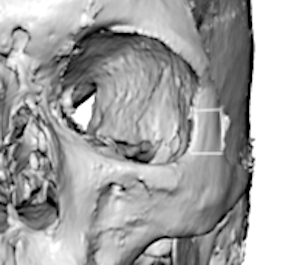 Case Study: This male had a history of multiple procedures done through the left lower eyelid that resulted in some soft tissue atrophy creating an outer eye indentation. This had been treated by hyaluron-based injectable fillers with some improvement. He desired a more permanent solution. 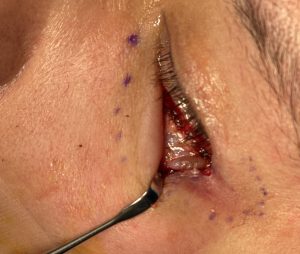 Through his existing subciliary scar line beneath the left lower eyelid lash line, a skin-muscle flap was raised. At its lateral extent gelatinous injectable filler was discovered and extruded. (removed) 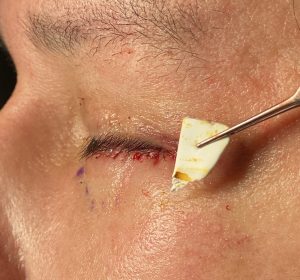 Subperiosteal dissection was done on the bone along the lateral orbital rim up to just below the frontozygomatic suture line. A 2mm ePTFE (Goretex) sheet was fashioned into a small implant to fit along the lateral orbital rim. After the first layer was placed a second layer on top of it was added for a 4mm augmentation effect. No screw fixation was needed or was necessary. 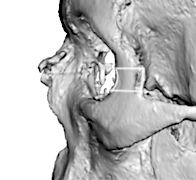 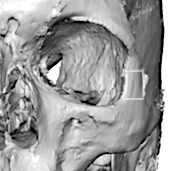 The outer eye area as it extends from the corner out into the anterior temporal region typically has a bit of small dip in its contour. But this contour depression can become more exaggerated in some patients due to age or prior surgery. It can be successfully augmented at the bone level with any variety of materials. It is more about getting the right shape and thickness of the implant and being able to get it into place with minimal scarring than it is about the material’s composition.

1) Outer eye indentations are soft tissue depressions or grooves that run laterally out from the eye corner.

2) Injectable fillers are the most treatment for outer eye indentations but is not permanent.

3) Permanent augmentation of the lateral orbital rim beneath the outer eye indentation can be done with ePTFE implants.