Background:  The ear, small in size that it is, has a very complex shape. Composed of numerous hills and valleys within its skin-cartilage composition, it has a convoluted topography as a result of its embryologic development. The outer ear achieves its shape through the merger of six hillocks which are derived from the first and second pharyngeal arches. This results in the tragus, crus and helix coming from the first three hillocks and the antihelix, antitragus and lobule coming rom the last three hillocks. As the embryonic ear migrates up from the neck to become a unified structure, it is a virtual miracle that it rests most of the time in a normal looking ear.

But with the hillocks merging and fusion needed to create an intact ear as we know it, there are lots of opportunities for structural malformations to occur. Some of these are quite major, such as microtia, but many are much more minor alterations in the cartilage framework. One such small ear malformation are tubercles, most commonly known as Darwin’s tubercle. These are raised cartilage thickenings on the helical rim usually located at the junction of the upper and middle thirds. It often occurs bilaterally and, while often purported to have a genetic basis, that remains unclear.

While the reason or function of these ear tubercles is uncertain, the derivation of its name and presumed relevance is interesting. While ear tubercles had been previously noted by others, it was Charles Darwin who described it as an atavistic feature. He drew the conclusion that their presence confirmed the common ancestry between man and primates, thus linking his name to the ear anomaly to the present day. While the validity of this association has never been proven, they are a unique feature of the ear that is an identifying feature to the few people who have them. 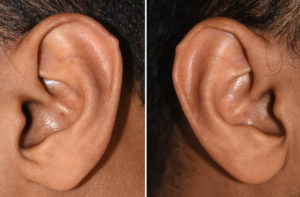 Case Study: This male had small bilateral ear tubercles which he wanted to remove. They presented as slightly thickenings of the cartilage at the superolateral junction of the external ear on the helical rim.

While they would normally be removed under local anesthesia they were removed under general anesthesia as part of other procedures being done. A small incision was made on the lateral surface of the helical rim. The skin was carefully dissected off of the back and front surfaces of the cartilage to provide full exposure of the cartilage. The acessory cartilage was then removed to make the helical rim level. The skin was closed with small dissolvable sutures.

Although ear tubercles are small, they are easily seen regardless of their size as they disrupt the smooth outline of the helical rim. While removing the raised rim of cartilage can be done by direct excision, a more aesthetic approach is to make the incision behind the tubercle and deglove the overlying skin for they cartilage reduction.

1) The ear is exposed to a wide variety of shape malformations due to its complex embryologic development of which one of the most minor and easily correctable are ear tubercles.

2) Ear or Darwin’s tubercles are accessory cartilage developments along the upper helical rim.

3) Darwin’s tubercles can be removed through a small incision on the lateral surface of the helical rim.