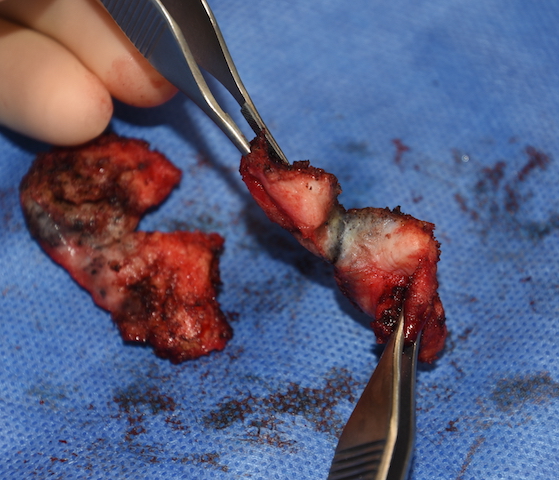 Background: The thick hair bearing scalp can develop a variety of benign soft tissue masses/tumors. Lipomas, dermoid cysts and pilomatrixomas are the most common and develop from natural structures that exists in the scalp. (fat, sweat/oil glands and hair follicles) Most such masses are readily identifiable when they are seen by exposing and removing them during surgery. And many of them can also be accurately guessed at before surgery by their history and physical examination.

But every now and then a scalp mass is encountered whose diagnosis is not evident. The history and presentation may be unusual and, even when the removed specimen is examined in surgery, what the mass is remains a mystery. 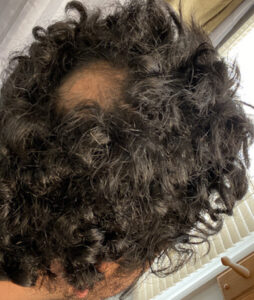 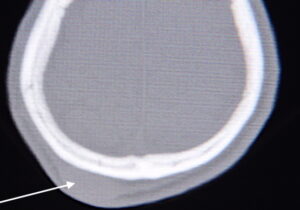 Case Study: This adult male presented with a large form scalp mass located over the crown area. It was a rounded protrusion that was associated with overlying hair loss. It was rock hard and a CT scan confirmed that it was a dense soft tissue mass and not a growth from the skull bone. He said it had been present since he was a child from a prior surgery. He did not know what that surgery was. It had remained the same size as long as he could remember. It was causing no pain. Loss of hair existed in the scalp overlying the mass 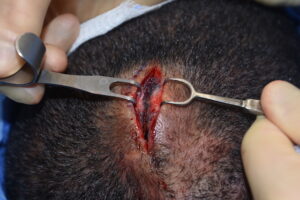 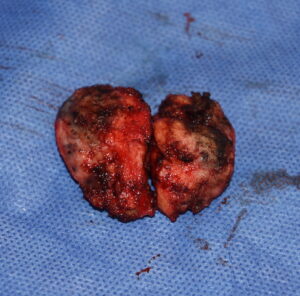 Under general anesthesia and in the prone position a vertical incision was made down through the scalp until the mass was identified right up against the dermis. Upon seeing and entering the mass it was lined/filled with small black particles amidst dense scar. The mass was extremely firm as was the overlying scalp tissue. It was so dense that it could only be cut out with a scalpel and even that was difficult. It was eventually removed by cutting back to normal tissue. 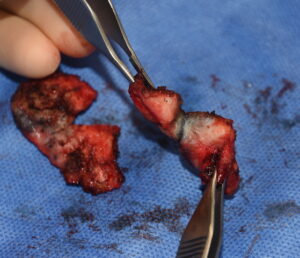 Sectioning of the mass revealed dense scar tissue with more black particles. Because of cost considerations the patient did not want it sent to pathology. As a result what it was will never be known although it appeared to be some type of foreign body reaction. It was clearly not malignant as it had not exhibited any growth since his childhood. 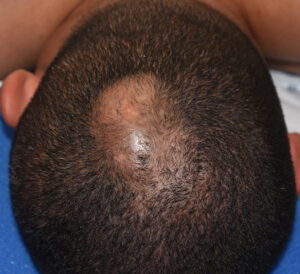 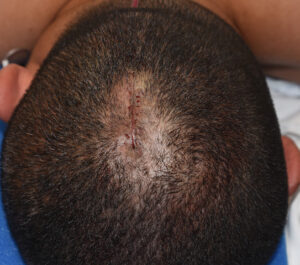 Once the mass was removed a drain was placed due to the large underlying space. Some excessive non-hair bearing scalp skin was excised to reduce the size of the bald spot. His immediate result showed elimination of the scalp protrusion and a smaller bald spot. 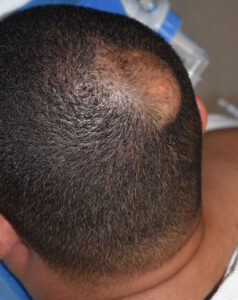 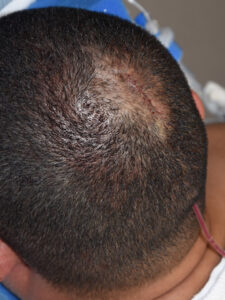 Six months after this surgery, when the scalp is healed, he can consider hair transplants to cover over the remaining bald spot.

1) Scalp masses are not uncommon and typically consist of typical lipomas and dermoid cysts as the most common.

2) A firm non-growing scalp mass associated with hair loss had been present since childhood.

4) Some of the overlying scalp without hair was removed to lessen the size of the bald spot.