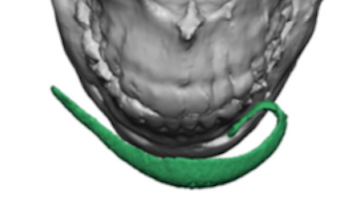 Background: Despite the chin implant being viewed as a ‘simple’ facial implant procedure, it is still capable of having problems related to style/size selection as well as positioning on the bone. While infection and hematoma is always possible with chin implant surgery the vast majority of revisional/secondary surgeries are related to some feature of the implant itself.

Such chin implant misadventures have a wide variety of manifestations. But the two most common in my experience are: 1) too wide of a chin implant in a female and 2) malpositioning of the wings of extended anatomic style chin implant.

I have seen many a female chin implant patient who found their result from the side view acceptable but hated it from the front view. This is the result of having no consideration for how the result may appear head on or obliquely…the very visual perspectives in which patients most frequently see themselves. This is most commonly the result of using extended anatomic chin implant styles with long wings. This implant style may have some merit for fitting onto the bone but it will always make the chin wider. Unless a female very specifically states they want a wider chin the use of anatomic or shorter winged implants is a better implant option. Remember that most women prefer a narrow or tapered chin appearance from the front view. A wider rounder chin gives a more masculine appearance.

Speaking of extended anatomic chin implants their long wings as mentioned may have their merits but their thin ends with little material can pose a problem. They are very easy to become folded or bent when inserted which is often undetectable to the surgeon because they are so thin. This usually occurs because the dissected pocket is just slightly short of the length of the implant. But can also be the result of how the implant was inserted. 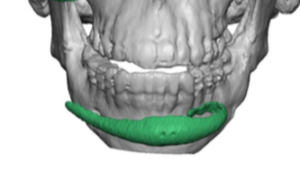 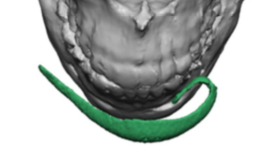 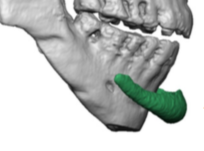 Case Study: This female had been bothered by how her silicone chin implant looked and felt even though the surgeon dismissed her concerns as unfounded. A subsequent 3D CT scan provided a visual basis for her concerns with a highly positioned , left wing folded, not even on the bone extended anatomic chin implant. 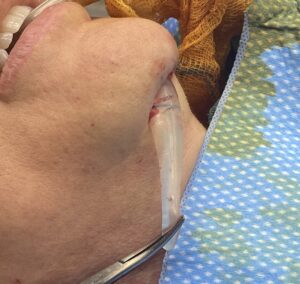 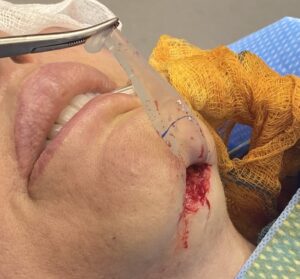 Under general anesthesia and through her existing submental scar, the existing extended anatomic chin implant was located and removed. It was difficult to remove as scar tissue had entrapped the left folded wing into place. 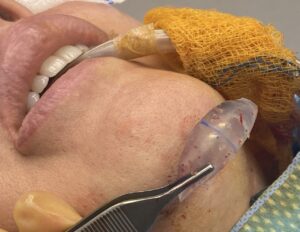 The extended anatomic chin implant was hand modified with a scalpel to become a much shorter length implant with a more tapered shape. 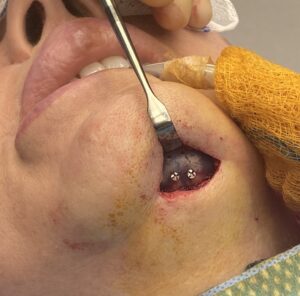 The new ‘anatomic’ style implant was positioned lower on the bone and secured in the midline with two microscrews.

When evaluating postoperative chin implant concerns the use of 3D CT scans can be invaluable. There is little purpose in trying to eyeball the problem based on external appearance or the reading of previous operative notes. Knowing the precise implant location, style and size allows one to approach the secondary surgery with a precise intraoperative plan for improvement. (the one caveat is that Medpor implants may or may not be able to be radiographically seen)

1) The best method to confirm the placement as well as style and size of a chin implant is with a 3D CT scan.

2) An anatomic chin implant in a female which has excessive width can be reduced hand modified into a smaller anatomic style which makes the chin less wide.