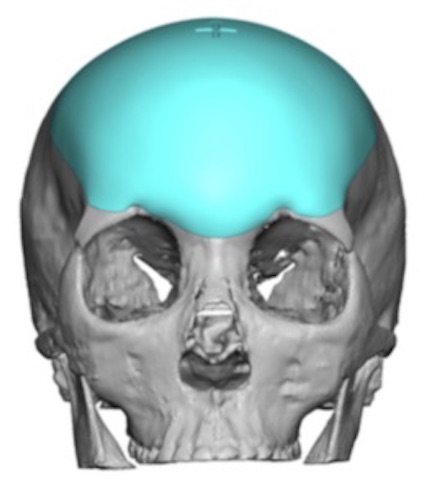 Background: Given that the size of the forehead occupies one third of the face it is no surprise that forehead reshaping surgery is important to some patients. One of the forehead reshaping procedures is that of augmentation, changing its shape to a more desirable and gender specific appearance. In females this typically refers to a more vertical forehead inclination that may be broader and often a bit flatter as well.

While bone cements and even some standard forehead implants exist, they are not as ideal as a custom forehead implant design. Besides being made specifically for the patient, the forehead shape can be better controlled for its extent of verticality, width and how far back onto the skull the implant goes. (forehead-skull interface) This results in an implant footprint (outline) that is bigger and covers more surface area than one would initially think.

The typical dilemma in any custom implant design is what would the footprint and its dimensions should be. This is no less true in custom forehead implants. As a general rule the female implant design should be at least to the anterior temporal lines, the brow bone area may often be minimally covered, the maximum projection is often at the upper forehead area and it should extend backwards well beyond the frontal hairline. But these are general guidelines and not absolutes.

Case Study: This young female desired forehead augmentation for a forehead shape that was more vertical and wider but added no/minimal brow bone augmentation. She was also going to get tail of the brow bone elevation at the same time which needed to be considered in the implant design. 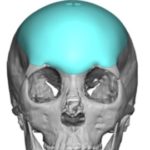 Using the 3D CT scan a custom forehead implant design was done to make the side profile of the forehead more vertical and the frontal shape more flat in the central region. The tail of the brow bones was excluded from the design since there were going to be shaved down. To get the forehead projection high the design extended back to almost the middle portion of the top of the skull.

Under general anesthesia and using a 7 cm scalp incision placed 3 cms behind the frontal hairline, the implant was initially placed after a wide subperiosteal undermining on the forehead. When placed as designed the forehead appeared too narrow and lacked the shape as desired. The implant was then placed in an inverted fashion which offered a wide shape that was more vertical….and it looked more like what the patient wanted. After hand carving the shape of the brow bones into its posterior edge it was reinserted and secured into placed with two small titanium screws.

Designing a custom craniofacial implant is never quite as simple as it may seem. If something about the external effect of the implant in surgery is not as desired one must be prepared to make implant modifications prior to final placement. Most of the time this is a reduction of some portion of the implant. In this rare case implant positioning/placement was the corrective course of action.

1) Forehead augmentation is most reliably done with a custom forehead implant which can be placed through a small scalp incision.

2) Females typically request a more vertical forehead inclination with a frontal shape that is slightly convex and with a wider forehead width.

3) In this case it became evident during surgery that the best forehead shave was to use an inverted placement of the implant to get the need forehead width.