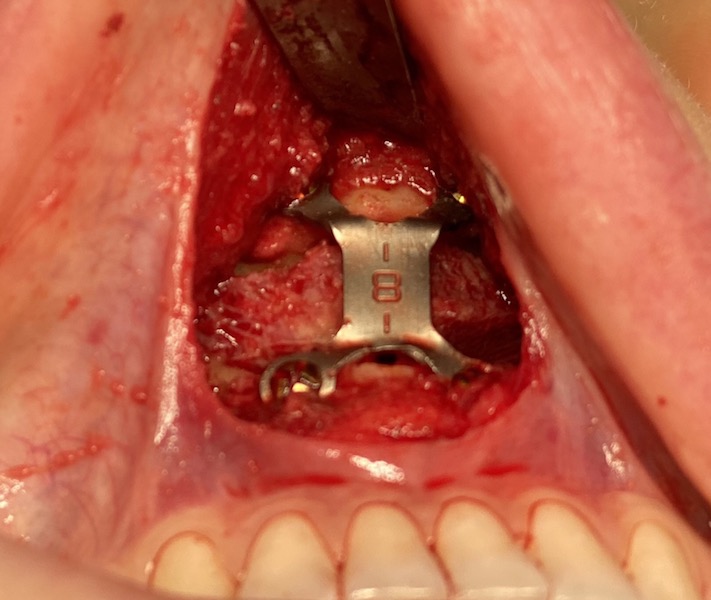 Background: The chin is most commonly thought of as being deficient in the horizontal dimension. But there are also instances where the chin may have adequate forward projection but is deficienct in length or height. This is the most frequently overlooked dimensional deficiency of the chin in my experience as it is not uncommon to see patients who have had a chin implant placed on the front edge of the chin bone and the chin still looks deficient because its vertical deficiency has not been addressed.

The vertically short chin has several visual manifestations that make it easy to to diagnose. Often the chin will look bunched up with a deep labiomental fold. The soft tissue chin pad may look compressed and even turned upward rather than wrapping around the end of the chin bone. (which does not exist) If facial third measurements are done the lower third of the face is short. From the side view the mandibular plane angle (line drawn between the inferior border of the jaw angle and the chin) will be almost flat to flat. The patient may subconsciously (or consciously) hold their jaw open because they feel/know it looks better by doing so.

While there is a role for implants in vertical chin lengthening it is limited to 3 to 5mms at most. Significant vertical chin length ing requires an intraoral osteotomy with an interpositional graft. This is best because it carries the soft tissue chin pad down with it as opposed to an implant where the soft tissue chin pad is detached and then must be pulled over the implant afterward. Too much implant lengthening will make it difficult to get the pad back over the implant resulting in the ‘double bubble’ chin appearance.

How much to vertically lengthen the chin can be measured multiple ways. But the best is the method that looks best to the patient. If the patient brings their jaw down to the position they like, measure the interincisal distance adding on the amount of overbite they have when in centric occlusion. This then becomes what the interpositional bone gap should be.

Case Study: This female was bothered by her vertically short chin. When she held in jaw in the position that looked best to her the vertical lengthening requirement was 8mms. 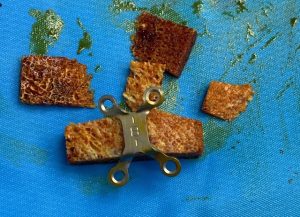 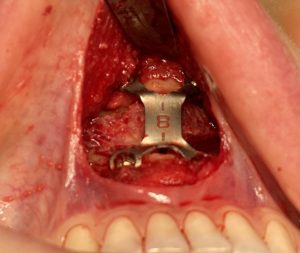 Under general anesthesia an intraoral horizontal chin osteotomy was performed. It was vertically lengthened by taking an 8mm step chin plate and making it completely flat. An allogeneic bone block was soaked in betadine solution and prepared with a reciprocating saw as an interpositional block wedge shape. This composite plate and bone block unit was applied into the 8mm bone gap and held interposition with two screws superiorly and inferiorly. The entire procedure was done through a 3 cm mucosal incision. 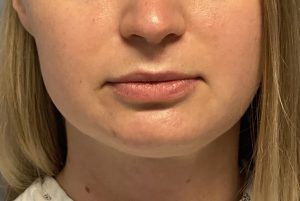 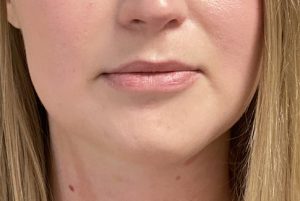 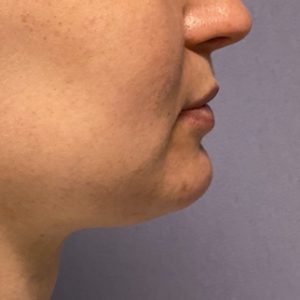 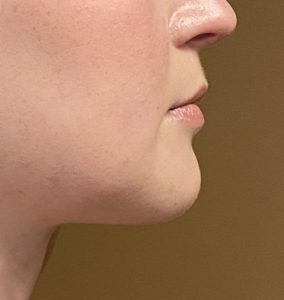 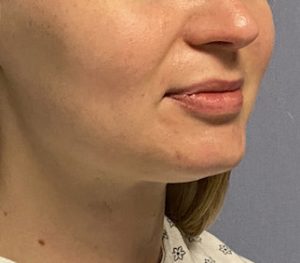 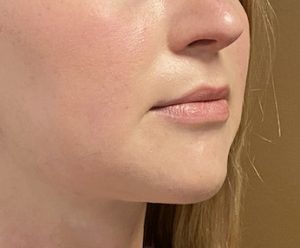 When seen the next day the aesthetic improvement in the chin shape could be appreciated despite the swelling.

1) A vertically short chin is seen frontally by a small lower third of the face and in side view by a flat mandibular plane angle.

2) Determining how much vertical chin lengthening is desired by the patient is measured by interincisal distance (plus overbite) when the patient does the jaw thrust maneuver.

3) Vertical chin lengthening is done by an intraoral osteotomy and an interpositional bone block graft.