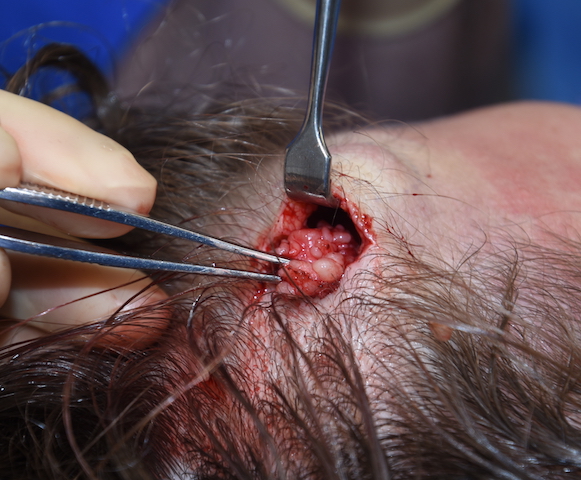 Background: Lipomas are one of the most common benign tumors, purportedly presenting as many as several million cases per year in the U.S.. While their exact cause is not precisely known, it is known to be an overgrowth of otherwise normal fat cells. They can appear at any time in life and are slow growing. They usually are painless and compressible. (soft) Patients often present for their removal for aesthetic improvement of a visible bump.

While they can occur anywhere on the body they often occur on the scalp and forehead as well. When presenting on the forehead they are especially visible due to its broad flat surface. Forehead lipomas, even when small, are frequently requested for removal for aesthetic reasons.

When seeing a circular mass on the forehead that is new and growing, the differential diagnosis is the distinction between a bone-based mass (osteoma) and a subcutaneous soft tissue tumor. While this can often be determined clinically by palpation, an MRI can clearly see the difference between the two. If it is a soft tissue tumor the two most common diagnoses would be a lipoma vs a dermoid cyst. But regardless of this actual diagnosis the surgical approach for its removal has the same considerations.

Case Study:  This young male had a slow growing circular soft tissue mass developing at his right upper forehead at his hairline. Interestingly the side with the soft tissue mass had hairline recession while the opposite unaffected side did not. His family physician ordered an MRI which show a soft tissue mass consistent with a lipoma.

Under IV sedation a 2 cm irregular zigzag incision was made just above the lipoma. This provided direct visual access to its circumferential removal with small resorbable suture closure.

In the forehead removal of benign hard and soft tissue tumors must consider the resistant scar location to do so. While direct incision over the mass may provide the easiest surgical access. The resultant scar will likely be unacceptable particularly in a young person’s forehead. In that regard the surgical approach I take is to divide the forehead into two vertical halves with a line placed halfway between the frontal hairline and the eyebrows. If the benign tumor lies above the line and in the upper forehead a small frontal hairline incision will provide adequate access and a good resultant scar. If the mass lies at or below this line then an endoscopic approach with two small incisions behind the hairline will suffice.

2) Excision of forehead lipomas should consider the surgical approach and resultant scar in doing so.

3) When the lipoma is close to the frontal hairline a small hairline incision provides the most direct and scar limited approach.