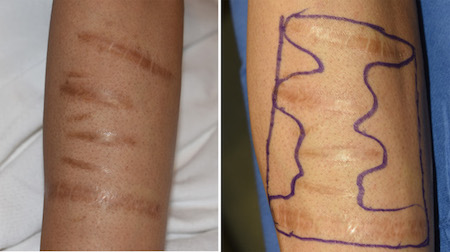 Background: While traditional scar revision techniques can provide good improvement in many types of scars, certain scar types can not be improved by such. Such is the case with self-harm scarring which most commonly occurs on the arms. Such deliberate injuries to the skin leaves very visible scarring in a most conspicuous place. Due to multiple transverse scars that line up along the volar forearm, and sometimes the upper arm as well, it is both a reminder of the past for the patient as well as impossible to provide a plausible explanation other than to revisit the past.

While cutting out each individual scar may be able to make them more narrow, the overall pattern of the scarring remains….and the patient really feels no better about it. A non-traditional but more effective approach is to change the appearance of the scar to a pattern that is much more easily explainable…which is that of a burn scar. While a scar is still present, and there is actually more scar tissue than that of the original scar by surface area, the pattern of the scar creates a much different appearance which makes the patient more comfortable with it.

Case Study: This patient presented with a series of seven (7) transverse hypertrophic arm scars on the volar forearm. 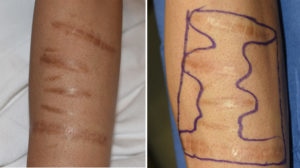 Under general anesthesia a non-geometric en bloc pattern of scar excision was marked. The entire area was de-epithelized leaving as much dermis as possible. A very thin (10/1,000 inch) split thickness skin graft was harvested and sewn over the excision site as coverage. 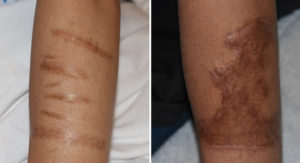 When seen one year later, the arm skin graft was well healed and flat. It was mildly hyper pigmented as would be expected with his natural skin pigment. The patient was very happy with the result and felt much better about its appearance.

En bloc scar excision and skin grafting is an aggressive but more effective approach for many self-harm scars. It is an interesting approach because the operation increases rather than decreases the scar burden. But in doing so it completely changes the perception of the scar to the patient and others.

1) Self-harm scars of the arm can not usually be improved by traditional scar revision techniques.

3) A burn scar appearance is more acceptable to the patient that multiple linear self-harm scars.