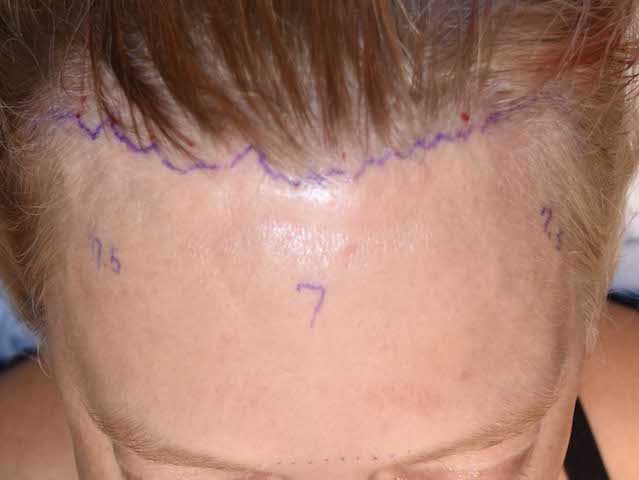 The frontal hairline procedure is a very effective technique for vertical forehead reduction but it has two drawbacks. The first is that the amount of frontal hairline relocation that can be achieved depends on the natural elasticity of the patient’s scalp. Even though the entire scalp is undermined posteriorly to the back of the head, some scalps have more stretch than others. My observation has been that the thicker the scalp is or the more pigment that is in the skin the greater the natural scalp stretch will be. But even in thinner scalps it is usually possible than at least 10mm of frontal hairline lowering can be achieved.

The second drawback to the procedure is the scar. How visible is it and will hair grow through the scar? It is often commented on that it does but long-term outcomes can confirm whether it does or does not.

Case Study: This female was bothered by her long forehead and would be happy to have even 1 cm of forehead reduction. Between the glabella and her central hairline there was a 7cm distance while at the tail of the brow to the hairline it was 7.5cms. 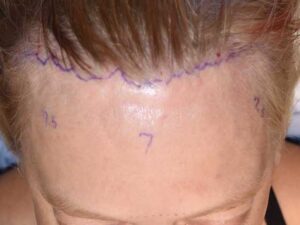 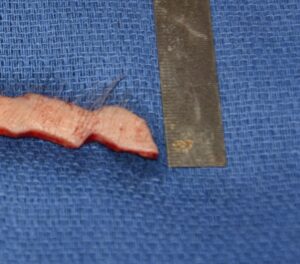 Under general anesthesia a frontal hairline advancement was performed for the amount of vertical forehead reduction that could be achieved with minimal tension on the closure. (12 to 15mms) 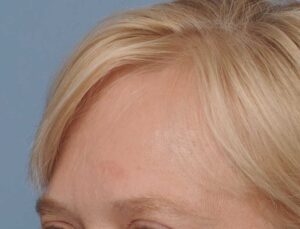 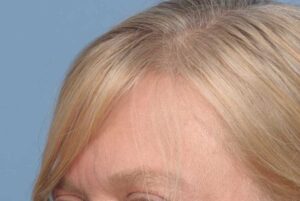 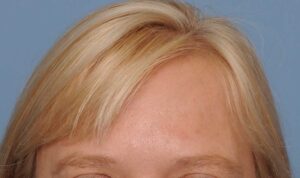 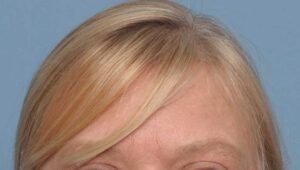 When seen several years later for other procedures the opportunity arose to evaluate her long term results of her hairline change. 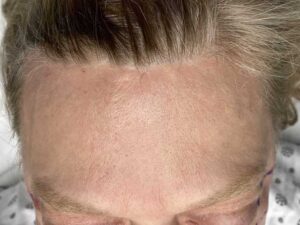 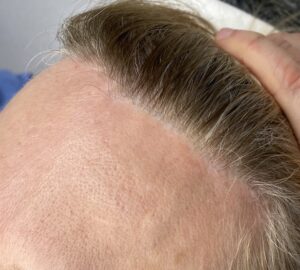 Close up of her frontal hairline showed a good scar outcome with hair having grown through the hairline.

By definition a frontal hairline advancement is a procedure that does place the scar line under some tension. In scalps that are thinner and with less elasticity this is inevitable to some degree to try and get the most advancement possible. But techniques such as strong galeal suturing and using gall sutures placed through outer cortical tunnels in the frontal bone can help keep the tension off of the skin level where the sensitive hair follicles exist right underneath it. In so doing good scar outcomes can be obtained and hair can grow through the scar using the standard trichophytic technique.

1) The effectiveness of hairline advancement, also known as vertical forehead reduction, depends on the patient’s natural scalp elasticity and how much hairline lowering is needed.

2) Most patients can get at least 10mms of hairline lowering.

3) The long-term scar from a frontal hairline advancement can show hairs growing through it.