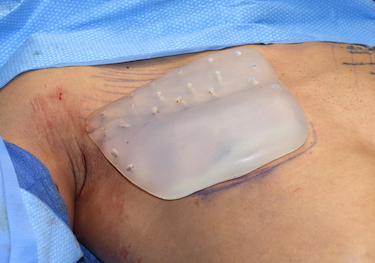 Background:  Poland’s syndrome is a well known congenital condition that causes lack of pectoral muscle development on one side. Other structures may be affected (ribs, upper extremity) but the one consistent feature is the underdevelopment of the pectoral muscle. This is the primary feature in which a male patient  presents for aesthetic improvement.

In men the most common form of reconstruction for the missing lower part of the pectorals muscle is a solid soft silicone implant. Such an implant has to be made using a custom approach, most commonly from a moulage taken from the patient. Such a custom pectoral implant is inserted through a high axillary skin incision and positioned partly under the what muscle remains on the superior and in a completely thin subcutaneous pocket on the lower end.

Like any implant that is placed fairly superficial in the tissues, there is always a concern of fluid collections (seroma) in the short term and mobility/displacement long-term. Such concerns are magnified in younger thin men who have a very active lifestyle such as strenuous workouts. 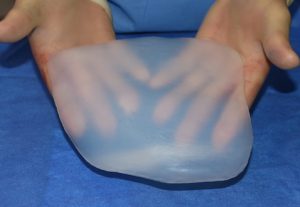 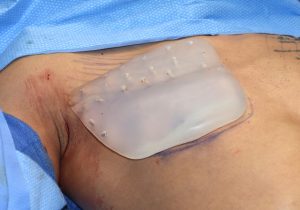 Case Study: This young male had a custom pectoral implant placed for his right Poland’s syndrome through a high axillary incision. The implant was design so that a portion of it fit under the existing muscle. Perfusion were placed through the submusular portion to allow for through and through tissue ingrowth.

A drain was used for 5 days after surgery and he returned home. His early result was very favorable.

He returned to working out one month after surgery. I heard from him one year after surgery in which his result remained with no problems despite his heavy workout routines. 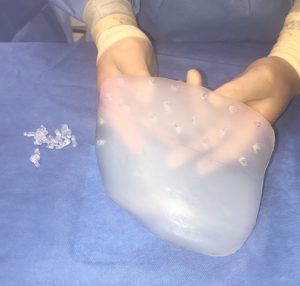 The principles of success in this more superficial custom pectoral implants is two-fold. First putting part of the implant under the existing pectoral muscle and incorporating that in the design allows for a large surface area coverage implant that benefits by at least partially being under muscle. Second the placement of the perfusion holes under the muscle portion allows for tissue ingrowth which establishes implant fixation more than just by the surrounding implant capsule.

2) In a very active young male Poland’s patient there is a short and long-term risk of seroma formation and implant displacement.

3) In this specific case the one year result remained stable and free of any fluid collections with stable implant positioning.