The infragluteal fold or sulcus has been studied anatomically and histologically and has been shown to consist of strong fibrous bands extending from the underside of the skin (dermis) of its medial third to the ramus of the ischium and sacrum forming the letter J. The infragluteal fold, which attaches to both the ischium and the sacrum in a continuous fashion, is an anatomic structure in its medial part and only a crease laterally. It largely disappears in its lateral third as it approaches the outer thigh.

Case Study: This 35 year-old female wanted to improve the shape of her buttocks. She was happy with her buttock volume and projection but felt the bottom had ‘fallen down’. She had an intact and defined infragluteal fold but her lower buttocks sagged over it. 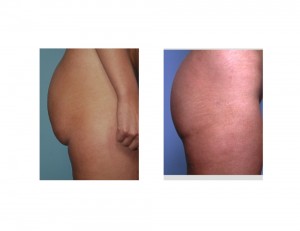 Under general anesthesia in the prone position, an excision was done using the existing fold as the inferior aspect. A predetermined and measured line has been previously marked in the standing position to serve as the superior incision line. This wedge of tissue was removed keeping it from extending out too far laterally. Deep dermal sutures attached the superior line down into the existing fold level to rid the buttock overhang. 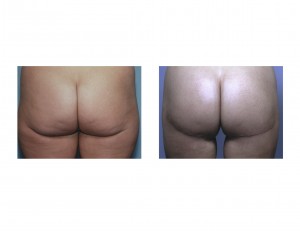 1) Sagging of the buttocks takes on several forms depending on the location and prominence of the infragluteal fold.

3) A lower buttock tuck removes overhanging tissue and creates a smoother transition between the buttocks and the posterior upper thigh.