Background:  The custom jawline implant is the most effective and powerful changer of the shape of the lower face in younger patients who do not have soft tissue aging issues. Because of its custom design it provides a good fit to the patient’s existing mandibular bone and creates a 3D expansion of the inferolateral bone from jaw angle to jaw angle in a wrap around manner.

Despite the many advantages of a custom jawline implant approach, it remains an imperfect technique. Its weak link is that no one can predict with a high degree of accuracy as to what implant dimensions are needed to create the patient’s desired aesthetic effect…eve if such aesthetic changes are possible. The computer does not know what implant dimensions are needed o create the patient’s desired effects and must rely on the surgeon’s (or patient’s) input to do so. In addition the effects of any bone augmentation can not yet reliably show what the external soft tissue facial effect will be.

A s a result, the patient’s desire for changing a custom jawline implant design, when the final result is fully appreciated both physically and psychologically (3 to 6 months after surgery) is not rare. I would put a conservative estimate of up to one-third of patients do so. And it is far more commonly to do so for relatively minor changes than major ones…although such a statement must be out into context as no patient considers a small change as ‘minor’ or irrelevant despite how it may be perceived by others. 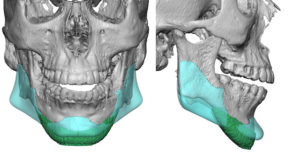 Case Study: This young male has a custom jawline implant placed six months previously as he graduated from a malpositioned indwelling chin implant. 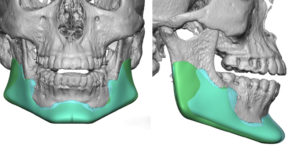 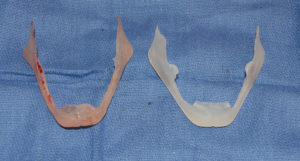 Under general anesthesia his existing jawline implant was unscrewed an removed thorough the same three incisions by which it was initially placed. It was placed in one piece and was extracted as such. When laying the old vs new jawline implants side by side, the eye could not tell their differences but the designs clearly showed them. (this illustrates that the computer is always better than the surgeon’s eye which can only appreciate much greater changes than a few millimeters here or there) Because the new implant had a comparative volume to that of the first (17 vs 15ccs) it could be placed with no concerted effort (capsulotomies) at expanding the existing pocket capsule. Which also means that the new jawline implant could be inserted as one piece as well. 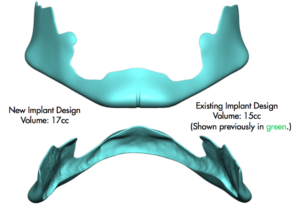 When the custom jawline implant volumes and footprint are not remarkably different the implant replacement surgery is ‘easier’. This means both the surgical exchange and usually the recovery as the pocket is not being traumatized as much. (it does not however mean the the risk of infection is lower)

1) The desire for custom jawline implant replacement is not rare and is based on either size or shape changes.

2) Having an indwelling jawline implant with a known aesthetic effect aids greatly in an improved design.

3) Replacing a custom jawline implant with a new one can be a less traumatic surgery with amore rapid recovery than the first implant placement surgery.