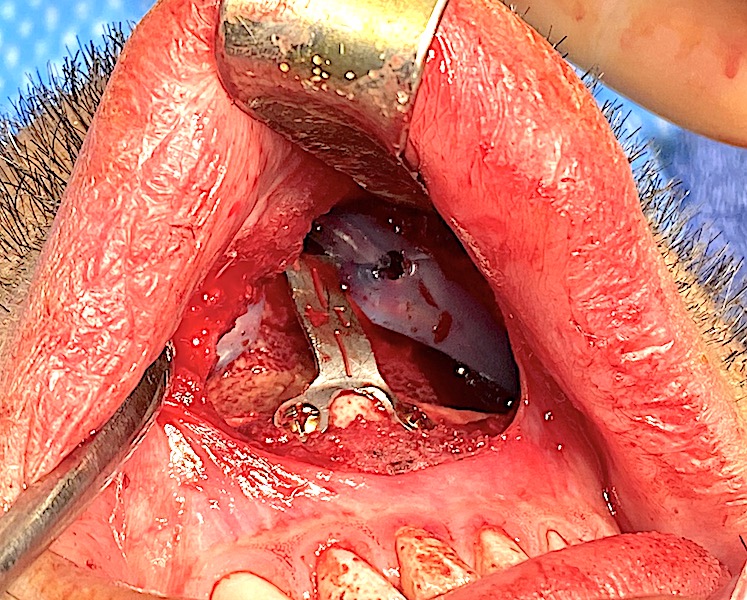 Background: Genioplasty is a generic term that refers to any manipulation of the chin. It does not specify exactly what that manipulation is but has become most synonymous today with the bone-based chin surgery known as a sliding genioplasty. While this is an operation that most frequently creates a horizontal chin augmentation effect it is also known to be able to create some vertical lengthening as well.

While pure vertical lengthening of the small chin can be done it is not known how much vertical lengthening can be safely achieved. Because the down fractured chin segment is attached to muscle and other soft issues it is a pedicled bone flap so it should be able to survive at almost any distance that it is separated from the superior bone segment. It is certainly true in my experience that dropping down the chin 10 to 15mms can be safely done. It would be prudent to place an interpositional bone block, usually of tissue bank origin,  across the gap to ensure that good bone healing is subsequently obtained.

While large amounts of vertical chin lengthening can be done, this makes the chin more narrow and not wider. To simultaneously widen a chin while making it longer requires the addition of an implant as an overlay. While the bone can be split and bone grafted this becomes potentially unstable and very likely to create irregularities and a risk of some bone resorption. An implant provides a smoother surface, an assured shape and less risk of causing bone resorption.

Case Study: This male had a relatively normal chin shape and length but he also had a flat mandibular plane angle. This made him feel that his face was too boxy and squat. Computer imaging was used to preparatively determine what chin changes would suit him better. It was decided that significant vertical chin lengthening was needed (greater than 10mms) combined with making his chin wider using a chin implant overlay. 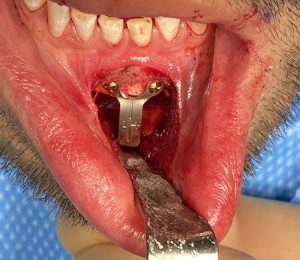 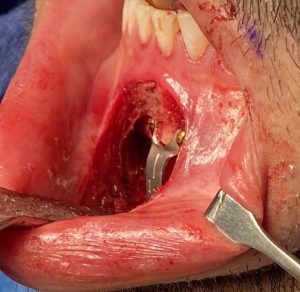 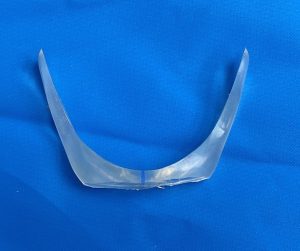 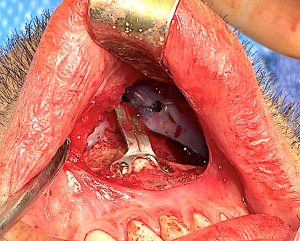 Then a style1 square chin implant was fashioned to be even more square with a scalpel, giving a boxy shape. Such over accentuation is needed due to the thick soft tissue thickness of the overlying chin pad. It was placed in front of the lower inferior chin bone and secured to it with 2 screws.

Significant vertical chin lengthening needs to be done by an open wedge osteotomy technique. An implant can only safely create vertical chin lengthening of more modest lengths. (5 to 7mms maximum) The large intervening bone gap created needs to be grafted to allow for one healing to occur across the gap. Allogeneic (tissue bank) corticocancellous bone blocks are better than allogeneic bone chips or any synthetic grafting material. Adding width to the vertically lengthened chin can only reliably done by an implant overly. This can be successful as long as the amount of horizontal augmentation is not excessive. (5mms or less)

2) In larger opening wedge bony genioplastigs an interpositional bone graft is helpful to expedite bony healing across the gap.

3) The only way width can be reliably added to a vertical lengthening bony genioplasty is an overlay chin implant.