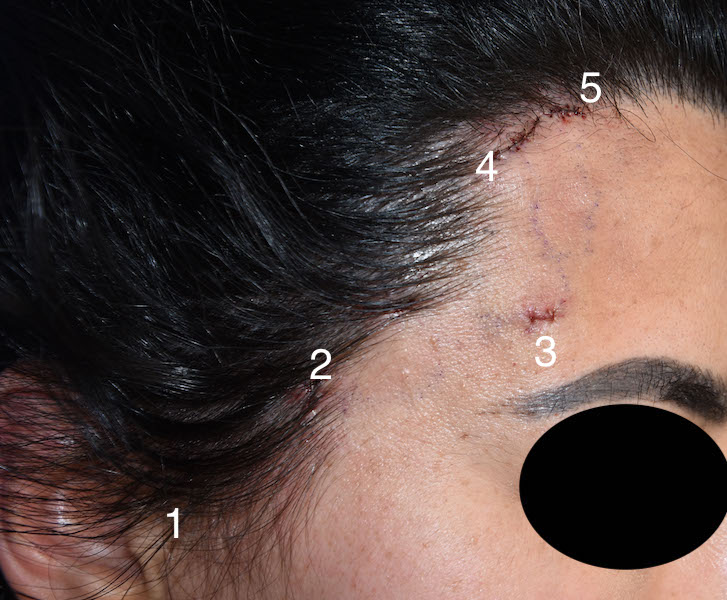 Background: The temporal artery is a branch of the external carotid artery that has it ascends toward the head does so in front of the ear. One above the ear it splits into an anterior and posterior branch. The anterior branch leaves the temporal hairline to cross into the visible forehead before continuing up into the scalp. 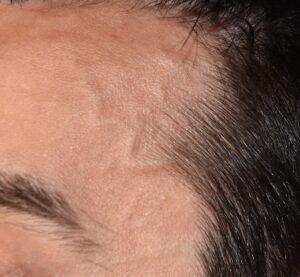 The anterior branch of this artery has a classic and consistently seen serpiguous pathway. It rarely has much variation in this irregular course as it leaves the temporal hairline in an oblique pattern and then becomes a Y configuration where it splits into two terminal branches  as it turns superiorly into the frontal hairline of the scalp. Why it has this exact consistently seen pattern is not known. Anatomical illustrations of it rarely show an accurate representation of the artery pattern as it crosses the forehead.

The course of the anterior branch of the superficial artery is not infrequently visible  as some people develop an unaesthetic prominence of it. Such a visible pathway of the artery is commonly seen in men which can be present to some degree all the time or mainly appears with any event that causes the artery to dilate. (heat, exercise, alcohol) It is not known why it occurs more commonly in men but may be due to thicker muscles walls, hormonal influences or both. It appears to occur far more infrequently in women…or at least they rarely present for treatment. 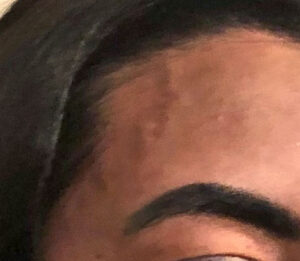 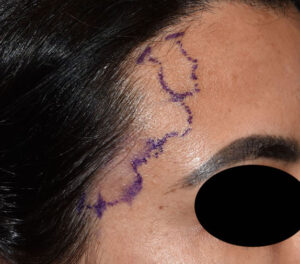 Case Study: This female present for treatment of an aesthetically bothersome visible anterior branch of the superficial temporal artery which appeared just on the right side. She has been through a medical workup for temporal arteritis including an MRA, all of which as negative to explain its presence. The pattern of the artery was marked out. 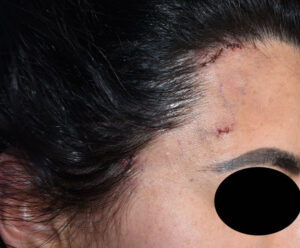 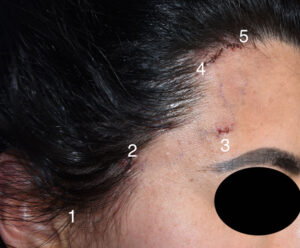 Under local anesthesia a multilevel five incisional ligation technique was used to eliminate all arterial pulsations as confirmed by audible doppler assessment. Only one of these incisions (#3) was out on the visible forehead.

Reduction of the prominent superficial branch of the temporal artery never is successfully reduced by a single ligation area. It almost always takes three and sometimes up to five (as in this case) to have assurance that it has been adequately reduced. One has to do enough ligations until the pulsations along its course are eliminated. A doppler listening device is better to make that end point assessment than a visual or digital evaluation.

1) A prominent superficial temporal artery appears in the upper temple and side of the forehead with a classic serpiginous pattern.

2) The appearance of prominent temporal arteries is far more common in men than women.

3) In multilevel temporal artery ligation in women most of the small incisions can be placed at the edge or in the hairline.