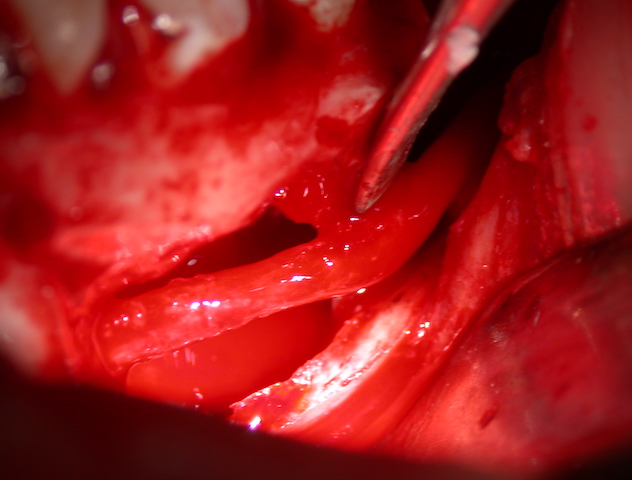 Background: The upper and lower jaws are prone to a variety of cystic lesions due to their teeth-containing elements. Between the formation of the teeth and their long term retention when erupted in the bone, cysts can result from the original follicular components or from apical pathologic reactions to dental disease. Often the discovery of cystic lesions of the jaw does not occur until they are fairly large and may present as external facial enlargements. Or they may be discovered inadvertently on routine dental evaluations as seen on diagnostic panorex x-rays.

When cystic lesions are discovered in children or teenagers, it is reasonable to assume they are of developmental origin. Because they may arise from the abnormal proliferation of tissues involved in tooth development, they are classified as odontogenic tumors which can include keracyst, ameloblastoma, myxoma, primordial cyst and a fibroma. While most of these lesions are benign, malignancies can occur and more likely if there is significant tooth root absorption.

A separate category of jaw cysts are the nonodontogenic cysts which are often confused with odontogenic cysts by their radiographic appearance. The two most common are the traumatic bone cyst and the aneurysmal bone cysts.(ABC) These emanate from the marrow space of the lower jaw, do not involve tooth root absorption and their radiographic appearance has smooth borders. These actually have no internal lining inside the bone and are believed to occur from internal hemorrhage of the marrow space. ABCs in particular occur in children and teenagers and are more common in females for unknown reasons.

Case Study: This young teenage female presented with the rapid development of a painless enlargement of her left jaw that was visibly disfiguring. Radiographic assessment showed a large unilocular intraosseous cyst involving the left mandbular body and ramus from the second premolar back into the ramus. No tooth resorption as seen. She has no numbness of the inferior alveolar nerve. The outer cortex had become expanded but not destroyed.

Under general anesthesia and through an intraoral approach the expanded outer cortex of the left jaw was removed from the ramus to just behind the mental foramen. Yellowish fluid was encountered but no real tissue lining was seen. The nerve was dissected out and preserved and the bony cavity scraped clean. It was subsequently filled with allegeneic (tissue bank) corticocancellous bone chips and the outer cortex put back and secured with 1.5mm plates and screws.

Before and after panorex radiographs show the extent of the presurgery lesion and its subsequent reconstruction. She went out to heal uneventfully and had no nerve numbness with complete bony consolidation.

Most cystic lesions of the lower jaw can be treated by intraoral corticotomy, enucleation with nerve preservation and bone graft reconstruction. With an intraoral approach the final result should be scar free with a normal lower facial contour and no loss of sensory nerve function.

1) Most cystic lesions of the lower jaw are benign and can be treated by enucleation and bone grafting.

2) Preservation of the inferior alveolar nerve is an important part of the enucleation process.

3) Allogeneic or autogenous bone grafting is a successful strategy for reconstruction of the resultant bony defect of the jaw.