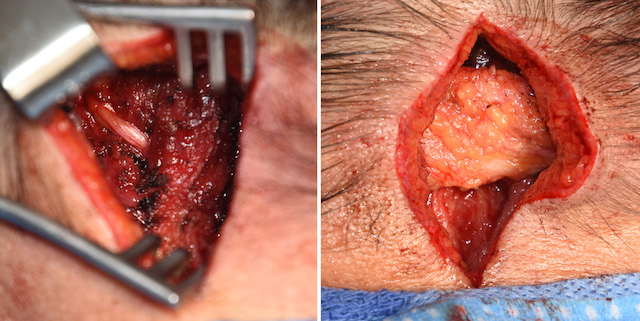 Background: Migraines are a common medical problem with variable causes and no one single effective treatment. Most treatment regimens are pharmacologic or prevention/avoidance of known triggers. While various surgical approaches to the treatment of migraines have been done, none have historically been very successful. Recent migraine surgery has focused a specific subset of migraines patients that have identifiable and reproducible trigger sites that correspond to the extracranial exit sites of certain sensory nerves. This is a decompression approach focusing on nerve preservation.

Determining who is a good candidate for migraine decompression surgery is based on their history and whether site localization can be done. Early in the development of this type of migraine surgery the use of nerve blocks and Botox injections were done to help determine how successful surgery should be. But I have largely bypassed this step currently as I think the specifics of the history and physical examination is the best indicator.

While there are numerous four different sites for migraine decompessive surgery, the most common is that of the greater occipital nerves. These are large paired sensory nerves that have their origin from the second cervical spinal nerve that passes through the neck muscles, specifically the semispinalis, before exiting to innervate the posterior scalp. Given their location, passage through multiple muscle and fascial layers and exposure to trauma, that can be a treatable source of occipital-based migraines.

Case Study:  This older male has a 30 years history of daily migraines since a motor vehicle accident in which he sustained whiplash trauma. Other this corse of time he had tried every known treatment method but none with any sustained relief. Their origin always started on the left side of his occiput and radiated forward. They rarely ever involved the right occiput. Digital palpation identities a specific point which was consistent with the near midline location of the greater occipital nerve. 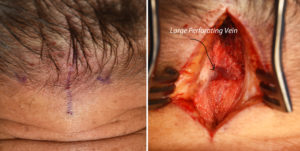 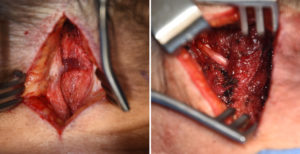 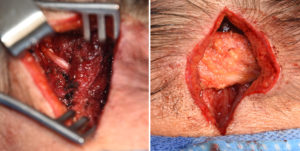 Under general anesthesia and in the prone position, an 8 cm vertical incision was made in the midline of the posterior scalp. Dissection exposed the muscle fascia at which a very large perforating vein was seen but only on the left side. Such a large vein in this location I had not seen before. Initially the right greater occipital nerve was isolated in its course through the muscle where it looked perfect normal…but it was decompressed anyway. On the left symptomatic side it looked completely different. The nerve was entrapped in heavy scar tissue and was smaller in size than the opposite normal right side. The nerve was decompressed all the way up past the nuchal ridge of the scalp through fascia release. To cover the exposed left occipital nerve a pedicle fat flap was raised from the subcutaneous tissue and rotated to cover the length of the nerve. Only skin closure was done over the fat flap.

Interestingly in the recovery room he stated this was the first time in years he did not have a headache. Whether this degree of symptom improvement is sustained awaits long term followup.

1) Symptom history and location is the most important criteria for determination of success of migraine surgery,

2) The greater occipital nerve is the most common site for migraine surgery and the most successful in my experience.

3) Prevention of scar tissue formation around the decompressed nerve can be most successfully done using local fat flaps.