Background:  The patella or knee cap is a well recognized prominence at the junction of the upper and lower legs. It is actually a bone, specifically a sesamoid bone. As a bone embedded in tendons it is the largest sesamoid bone in the body. Like all sesamoid bones one of its primary functions is to act as a pulley by providing a smooth surface for tendons to slide over. This is evident in the quadriceps femoris tendon which covers much of the superior surface of the patella with the patellar tendon covering the inferior surface.

The shape of the patellar bone has a flat anterior surface with a triangular shape with the apex pointing inferiorly to which attaches the patellar ligament. The upper third of the patella has a roughened outer surface to which is attached the quadriceps femoris tendon. This portion of the patella often has bony outcroppings or exostoses.

These upper patellar exostoses are what creates externally prominent bumps. On he upper circular portion of the bone. While these are perfectly normal and have no adverse effects on function they can be a source of aesthetic distraction.

Case Study: This male was bothered by the bump on his knee, specifically the superiomedial edge of the patella. He had previously tried augmenting the indentation next to it by having Sculptra injected in the subcutaneous space…without success at camouflaging it. 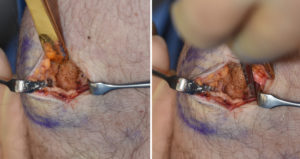 Under general anesthesia and through a small semicircular 2.5cm incision, the tendinous attachments directed over the bump were vertically incised and the superiomedial bony prominence exposed by subperiosteal dissection. It was removed with a reciprocating saw exposing the diploic space of the bone. A high speed handpiece and burr was then used to smooth out the outer cortical edges. The vertical split of the tendons was closed over as well as the overlying skin.

Reshaping the the upper half of the outer surface of the patellar bone can be done but requires incising the overlying tendinous attachments. This will cause considerable immediate postoperative discomfort with knee flexion movement as would be expected but a full recovery will occur.

1) The patellar bone has multiple bony exostoses on its upper outer surface which are often called knobby or bony knees.

2) Certain of the upper patellar exostoses and be reduced for aesthetic reasons.

3) Because of the need to pass through and elevate some of the tendinous attachments, temporary postoperative discomfort and limited knee range of motion will occur.